Distillery
On the sea. Well, not really, but kinda’ true. Whilst being a relatively young Cognac house, Kelt has links that go back for several centuries. The Kelt family is originally from Scandinavia, but Mr. Kelt spent years studying distillation of Cognacs, Madeira, Rum, and Aquavit.

His studies opened up a completely new perspective on aging when he found out that in the good ol' days, spirits were transported from one place to another in barrels on long sea voyages.

The company began experimenting with the new old approach in 1990 when their first Cognacs were sent on a sea voyage.

They got many doubtful looks, but when they organized a tasting session with top names in the Cognac industry... Well, let's just leave it at CHA-CHING!

Today, Kelt Cognac has a worldwide distribution network and uses every modern technology possible to promote their spirits, while very strictly sticking to the Cognac production methods of the 18th and 19th century.

Cognac-making has developed over centuries into the art form it is today. There are four main elements (growing area of grapes, distillation, aging, blending) determining the quality of the end product, but Kelt went ahead and brought back the fifth element.

The element that in the past no one even thought about because it was taken for granted—Ocean maturation.

Until the early 1900s all Cognac was shipped in barrels and while most Cognac houses abandoned this tradition, Kelt is heck-of-a proud of it. And they should be!

The barrels are filled just under three-quarters full so that the liquid inside can sufficiently move while still having a large enough surface for ideal alcohol evaporation.

The voyage takes between 90 and 110 days, depending on the weather conditions, and afterwards, the Cognac is left to rest in the barrels for three to five more months before being bottled.

The Flavor Spiral™ shows the most common flavours that you'll taste in Kelt Cognac. It's based on all Kelt drinks in our large database and gives you a chance to taste Kelt before actually tasting it.

Dog Dogson's
Smartass Corner
Kelt has a so called Tour Du Monde Committee, whose Members can help shape the future of their Cognacs. They are regularly consulted on new expressions, have a chance of buying the exclusive Committee bottling first, can attend special gatherings, tastings, and events. And the best thing about it? It's free for anybody to join! 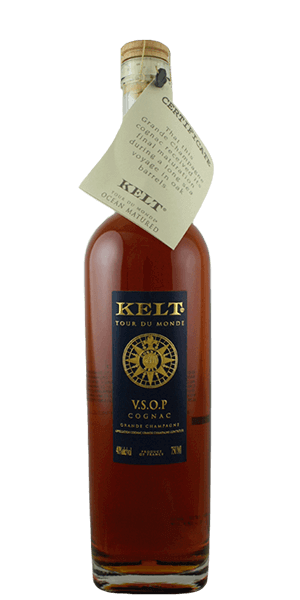