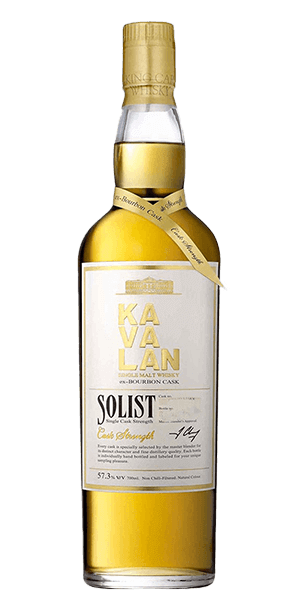 If you have not heard of Kavalan yet, get ready for us to blow your Whisky-loving mind. That’s because Kavalan Distillery is located on the island of… Taiwan. And this relative newcomer to the pantheon of single malt deities is kicking serious single malt butt — winning awards and beating some of the most famous Whiskies in blind taste tests. Even Jim Murray himself has become a fan. Kavalan was founded in 2005 by Mr. Tien-Tsai Lee and is now owned by Taiwan’s King Car Group. They have developed a range of eighteen single malt offerings.

Let’s start by saying that Kavalan ex Bourbon Cask has won just about every gold medal that you can think of, and a rare platinum one too. They take their exceptional single cask Solist Whisky and cut it a bit with natural spring water. As far as we are concerned, this Taiwanese gem is just perfect! And as the name implies, it is aged exclusively in ex-Bourbon casks.

The Flavor Spiral™ shows the most common flavors that you'll taste in Kavalan Solist Ex-Bourbon Cask and gives you a chance to have a taste of it before actually tasting it.

Sophian, Aug 17, 2019
As opposed to the Solist Sherry cask, I love this one! Again bourbonny vanilla at cask strength to the fore! Juicy ripe banana-peach. Good amount of oak to balance. Finish is long and semi dry. Killed 3 out of 4 bottles acquired in 2013 (thereabouts). One more bottle to go!