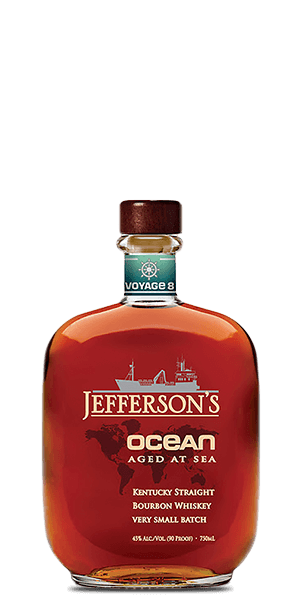 Jefferson’s famous Ocean "Aged at Sea" Voyage #8 contains both classic Bourbon notes and the essence of the sea.

Jefferson’s was founded in 1997 by Trey Zoeller and his father Chet — a famed Bourbon historian who wrote the book on Kentucky distilleries. Yes, an actual book called "Bourbon in Kentucky: A History of Distilleries in Kentucky." And eight generations ago, their great-great-grandmother was arrested for the "production and sales of spiritous liquors" in 1799. Which makes her the coolest ancestor ever! They acquire and produce a range of specialty Bourbons and Rye Whiskies. In 2007 Jefferson’s was sold to Castle Brands to build upon their portfolio of premium Spirits.

We all know that Bourbon is great. It’s one of the most popular Spirits in the world. And the thing that makes a great Bourbon even greater is a REAL story behind it.

Each release of Jefferson’s Aged at Sea Ocean series is different. The current release is #19. But there are a few cases of Jefferson’s Ocean Aged at Sea Voyage 8 still out there, and we got our hands on them. With casks of Bourbon on board, the good ship Parsifal sailed thousands of miles, crossed the equator twice, plied rough seas and calm, and experienced the hot tropical sun and frigid southern seas. All of that motion and atmosphere is tasted in every drop. The barrels came ashore in 2016 and the Spirits is bottled at 45% ABV.

The Flavor Spiral™ shows the most common flavors that you'll taste in Jefferson's Ocean Aged at Sea Voyage 8 Bourbon and gives you a chance to have a taste of it before actually tasting it.

Nose / Aroma / Smell
With a warm and bracing aroma, you will detect apricots, toffee, and caramel apple.

Flavor / Taste / Palate
On the palate, the Bourbon opens with traditional caramel, oak, and vanilla notes before opening up on the middle palate with the sea influence of brine.

Finish
The finish is medium length with a note of sea salt caramels.

Brian, Dec 27, 2020
Voyage 1 and 2 were my favorite. This one is decent but ocean bourbon is over priced

Stuart, Dec 18, 2020
Takes a bit of time to open up but is worth the wait. Gets very smooth and flavorful with just the right spice/pepper kick at the end. A good addition to a whiskey/bourbon collection

Jeffrey, May 26, 2020
Excellent Bourbon!! Very smooth and sweet with just a hint of heat.

Paul, May 26, 2020
Ordered voyage 8, received voyage 17. Great whiskey just not what was advertised/purchased

Liz, Jun 30, 2019
A little too tannic and metallic for my liking, but the moderate burn with the finish was delightful.

John, Dec 20, 2018
Salt definitely comes through which compliments the softness of this bourbon. Subtle bite at the end. Not really my style. Would drink it again if given but would not go out of my way.
Load more reviews