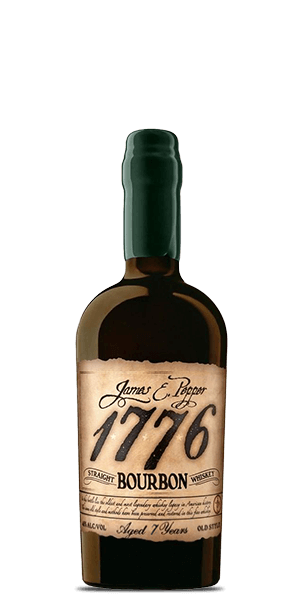 Bourbon Aristocrat legend is back.

Between the two wars, there was a man with a vision in Versailles. The two wars were the American Revolution and the War of 1812, this Versailles was in Kentucky, and the visionary in question was Elijah Pepper. He was a Bourbon distiller who passed his family business to his son and grandson. The latter one was James E. Pepper, a colonel, a Bourbon aristocrat, and the creator of the Old Fashioned cocktail. His distillery was a powerhouse until 1958, when the entire industry fell on its knees.

But the Old 1776 Whiskey, a favorite of Andrew Jackson and Ulysses S. Grant, could not lay in oblivion forever, because good things tend to come back. Amir Peay, an entrepreneur from Georgetown decided to re-found the historic James E. Pepper Distillery and revive the brand. He spent years researching and analyzing the recipes and preserved bottles, and in 2008, the legend was back.

The 1776 Straight Bourbon is made from corn, malted barley and rye, mixed carefully in the ratios written down in a letter by Pepper himself. After they distil the Bourbon, they put it in virgin American oak casks and let the potion age for seven years. When one opens this precious bottle, hits of vanilla and caramel come through, accompanied by the notes of oak and spices. Peay used traditional methods championed by Pepper while restoring this Bourbon. Label on the bottle states: "In this botttle lies the most legendary Whiskey legacy in American history. The same old style and methods have been preserved and restored in this fine Whiskey."

Thank you Mr. Peay, we salute you!

The Flavor Spiral™ shows the most common flavors that you'll taste in James E. Pepper 1776 7 Year Old Bourbon Whiskey and gives you a chance to have a taste of it before actually tasting it. 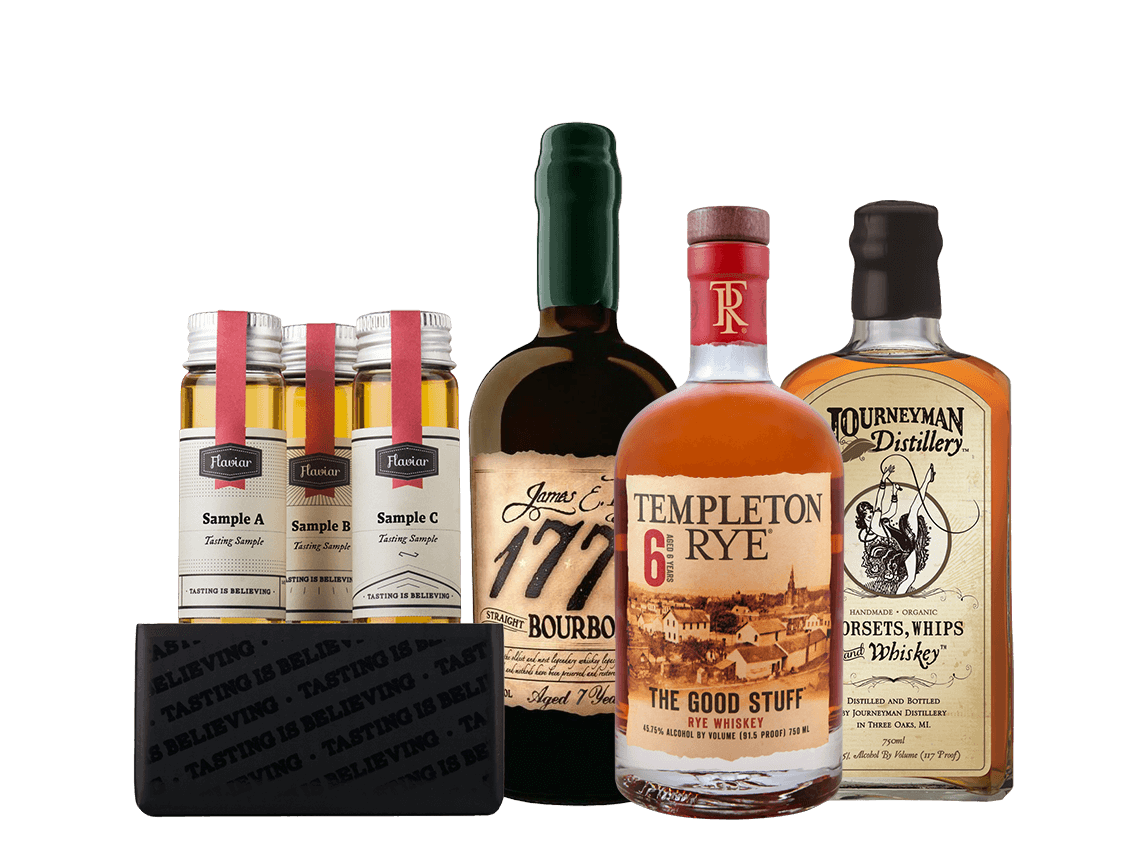 Born In The Usa
Grains That Built America
Whisk(e)y
7.3/10 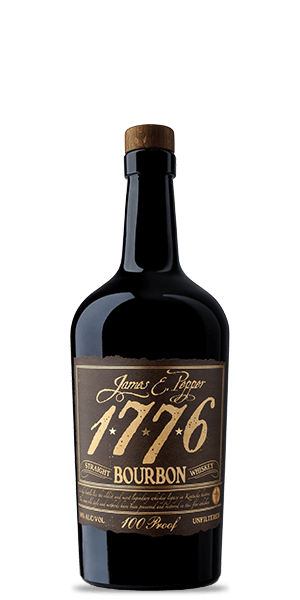 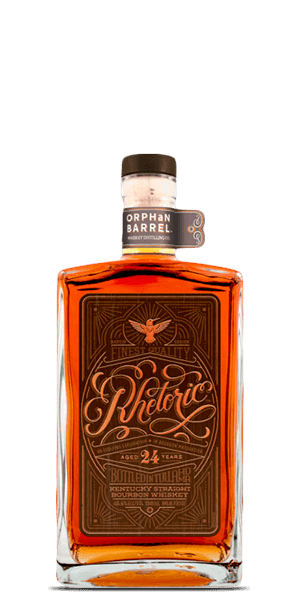 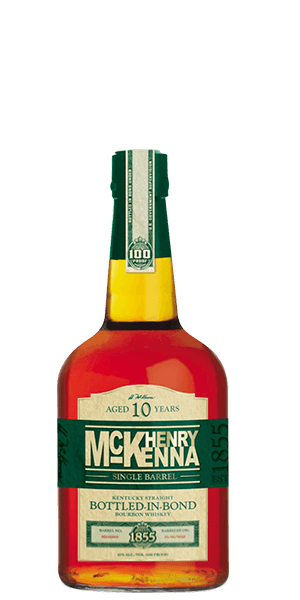 Thomas, Nov 4, 2020
Well-balanced and complex, lovely nose and pleasantly spicy with underlying sweetness on the palate, oak and spice on the finish. My new favorite!

Tyler, Oct 9, 2020
Very strong spice tastes with the chocolate and caramel coming through. Smell of the rye is appealing along with the spice to suit

Mat, Oct 3, 2020
Really loved this. Rich and complex aromas and flavours. I got chocolate, orange, burnt caramel, vanilla and some rye savoury notes on the nose. spicy and slightly savoury on the palate with spicy rye coming through and more vanilla and caramel on the finish

Antti, Aug 11, 2020
It is an outstanding, balanced, Straight Bourbon Whiskey that has an aromatic birth; while a rich & spicy life leads to a long & balanced death with notes of oak, rye & pepper.

Ryan, Jul 11, 2020
I felt like the nose was almost overwhelming. Very spicy in the start, but then gave way pretty spontaneously to the honey and caramel. It took a couple good sips before i could start to taste the more complex flavors. Overall I enjoyed it. I wouldnt turn down a glass, but i won't be running for a bottle either.

James, Jun 3, 2020
Surprising on the palate. One of my favourites actually and a real peppery lock. Plenty of sweet notes, with the honey and caramel coming through initially. Finishes off with the very slight aniseed taste.

Terry, May 22, 2020
Nice nose not overpowering. Spice upfront with sweetness following. Lingering spice burn. There is a balance of spice and sweet.

Ryan, May 14, 2020
Good caramel flavor with a load of spice. Went down with a good amount of burn. I almost got a hint of wheat/bread on the finish after a while.

Gašper, Jan 7, 2020
Spicy staff.Bourbon isnt for me though

Alex, Oct 13, 2019
In the spirit of freedom and the US of A! This bourbon is excellent! The bold spice coupled with the muddled sweetness of the caramel, cinnamon, and chocolate mold together to make an outstanding profile!

Luis, May 31, 2019
A decent drink - a fairly even and composed bourbon that has a lovely, intoxicating vanilla scent, but is primarily spicy on the tongue. Enjoyable, but certainly not a “premier” bourbon.

Vanessa, May 13, 2019
Delicious - smooth, easy to sip & even better on the rocks. My favorite of the Born in the USA tasting set (the other 2 were: Journeyman & Templeton Rye Spirits).

Kyle, Apr 17, 2019
Tried it straight very harsh. May give it another chance on the rocks but the spice was very overpowering couldn't get much of the other flavors.

Richard, Mar 10, 2019
I found myself coming back for seconds with this one.

Miro, Feb 20, 2019
Hmmm, For the price extremely good. My first time opening the bottle I did a tasting of Old Forester 90 proof single barrel, Jefferson rum cask aged bourbon and this. So it came in third but was the least expensive. Not really a fair tasting frankly. It does have a bit more of an alcohol finish. So yeah for the price it is exceptional but it's not comparable to the two others I tasted it with.