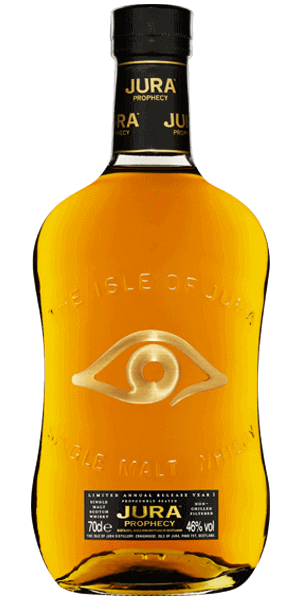 The Prophecy has been fulfilled - you're drinking it.
Established in 1810 on the Isle of Jura, north-west of the Island (and whisky region) of Islay. As with many other Scotch distilleries, Jura went through a rough patch in the first half of the 20th century. It wasn't until 1960, when two local estate owners, Robin Fletcher and Tony Riley-Smith rebuilt the distillery and introduced taller stills that allowed Jura to create a wider mix of malts. Jura’s Whiskies are just as unique as their place – a range of rich, seafaring Whiskies – some lightly peated, others carrying a heavier peated profile.

Prophecy stands out amongst its Jura friends as a smokier and more heavily peated expression. Imagine you are one of those bodies preserved in peat. That’s what it's like to drink Jura Prophecy.

This very fine malt is is made in small batches from old and rare casks. The thick wafts of smoke last from nose to finish, deepening and enriching the coastal flavours also embodied in this dram. Prophecy is a Scotch that sticks close to its home, with a tangy sea-salt buried beneath all that peated smoke.

The Flavor Spiral™ shows the most common flavors that you'll taste in Jura Prophecy Whisky and gives you a chance to have a taste of it before actually tasting it.

Rasmus, May 16, 2020
Excellent whiskey. Sweet with heavy oak and peat. Quite complex

Rod, Aug 14, 2019
I liked this one so much that of course they stopped making it. Great peaty taste. I did not like peaty scotches until I had this delightful scotch. Jura, if you're reading, bring this back!

Bradley, Jul 1, 2018
Very tasty. Not as smoky/peaty as some of the Islay scotches but still plenty of campfire

Myke, Apr 11, 2018
For the price- this is a solid bottle! As islay a non-islay Ive ever tasted. Strong peat and smoke notes, with a fairly clean finish.