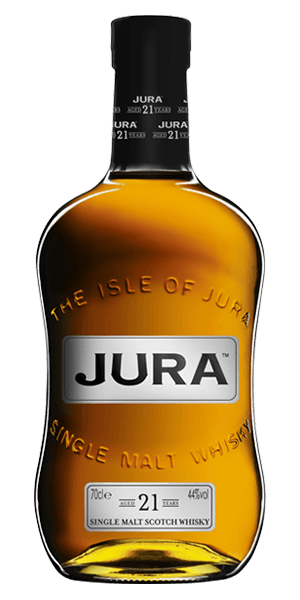 Established in 1810 on the Isle of Jura, north-west of the Island (and whisky region) of Islay. As with many other Scotch distilleries, Jura went through a rough patch in the first half of the 20th century. It wasn't until 1960, when two local estate owners, Robin Fletcher and Tony Riley-Smith rebuilt the distillery and introduced taller stills that allowed Jura to create a wider mix of malts. Jura’s Whiskies are just as unique as their place – a range of rich, seafaring Whiskies – some lightly peated, others carrying a heavier peated profile.

The Isle of Jura 21 Year Old is a a discontinued expression from Jura's "rare-milestones" range. Aged in vintage casks, this Scotch is full-bodied, with marzipan, walnuts and bitter chocolate notes. Gets better and better as you get to know it. It’s the essence of Jura, and it really is something special.

The Flavor Spiral™ shows the most common flavors that you'll taste in Jura 21 Year Old and gives you a chance to have a taste of it before actually tasting it.

Sean, May 8, 2020
This is the best Scotch I've ever had. It is well worth the price! Its the smoothest and most unique Scotch, Whiskey, Bourbon I've ever tasted. I have $500 bottles that don't live up to this bottle.