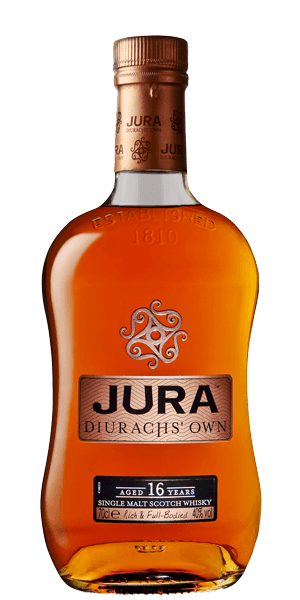 Isle of Jura Jura 16 YO Diurachs' Own

Established in 1810 on the Isle of Jura, north-west of the Island (and whisky region) of Islay. As with many other Scotch distilleries, Jura went through a rough patch in the first half of the 20th century. It wasn't until 1960, when two local estate owners, Robin Fletcher and Tony Riley-Smith rebuilt the distillery and introduced taller stills that allowed Jura to create a wider mix of malts. Jura’s Whiskies are just as unique as their place – a range of rich, seafaring Whiskies – some lightly peated, others carrying a heavier peated profile.

Isle of Jura 16 YO Diurachs’ Own is the dram of choice for the people of Jura. The 16 YO embodies the character of the islanders, the old legends, dramatic landscapes and island mysteries. It was matured for 14 years in American white oak casks before it was moved for a flavour finale and aged in Oloroso Sherry casks. Diurachs’ Own is an experience that must be sipped slowly, and you cannot be rushed in doing so. Sit back, relax, have some apricot-stuffed lamb, and enjoy a glass. Or two.

The Flavor Spiral™ shows the most common flavors that you'll taste in Jura 16 YO Diurachs' Own and gives you a chance to have a taste of it before actually tasting it.

guest, Oct 20, 2015
Tastes smokey but can be taken away with a little water.
Load more reviews