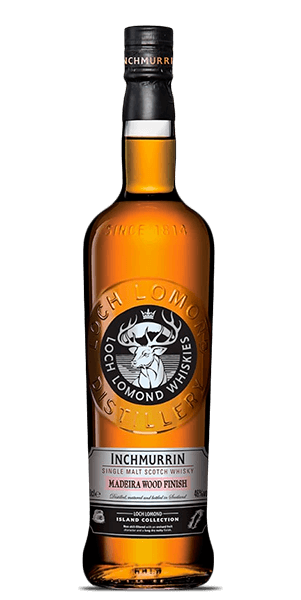 The story of Loch Lomond is a story of ancient clans that surrounded Lake Lomond and their values and traditions. The first distillery was located on the far north of the lake in 1814 but disappeared somewhere in the 19th century. The new one was founded in 1964 near Glasgow and it's still making fantastic Whiskies. The name of this expression, Inchmurrin, comes from a tiny island on the lake, and it's a part of a special Single Malt collection.

Inchmurrin Madeira Wood Finish is a wonderful no-age-statement delight, bottled at 46% ABV. It spent some time in American white oak barrels, followed by extra finishing in casks that used to hold fortified Madeira wine. They enhanced the fruit character of peach and pear and gave this Scotch a long oaky finish. And we're not the only ones loving this Spirit. It won four medals, including two golden at San Francisco World Spirits Competition. Rightfully so, because it's a misty oak fairytale with a captivating Portuguese twist at the end.

The Flavor Spiral™ shows the most common flavors that you'll taste in Inchmurrin Madeira Wood Finish and gives you a chance to have a taste of it before actually tasting it.

Nose / Aroma / Smell
Immensely nutty with notes of nutmeg and allspice, and a hint of sweetness.

Finish
Lovely and warm finish with a sweet and oaky exit.

Jacopo, Oct 29, 2020
Very good. Could be a little too sweet for some palats, but I really liked it

Antti, Jun 14, 2019
It is a outstanding, rich, 'Single Malt Scotch Whisky, with a semi-sweet & nutty birth; while a full & bold life leads to a rich & delicate death with notes of sugar & oak.