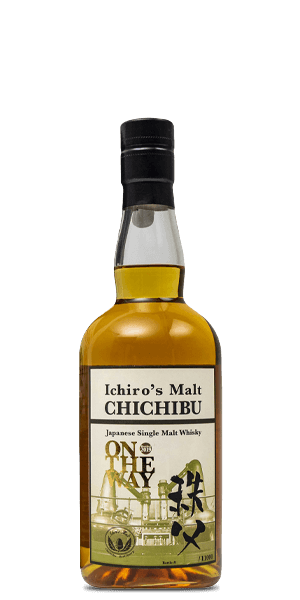 One of the most sought-after annual releases of malt Whisky from Ichiro’s Chichibu Distillery.

The best description we’ve ever heard about Ichiro Akuto is that he’s the "Rock Star of Japanese Whisky." While the other heavyweight executives of Japan’s thriving distilling industry can walk around Spirit conferences in obscurity, Ichiro Akuto gets mobbed by fans. With good reason. His family owned the legendary Hanyu Distillery for generations and when they sold the business, Ichiru held on to the standing inventory and issue special releases for years — including the famous "Playing Cards" series that made him famous. He has used those proceeds to craft new flavorful blends and other tasty offerings, and has launched the Chichibu Distillery which began operations in 2007.

The "On The Way" releases from Chichibu Distillery are a specific annual releases that shows the progress of the Spirit at different stages of aging. Each one is eagerly awaited by Whisky insiders who want to grab a dram of history in the making. Ichiro’s Malt Chichibu On The Way 2019 Release is culled from fifty-two casks aged between five and ten years. The mix of casks is eclectic with the majority being first-fill ex-Bourbon barrels with some second-fill quarter casks (chibidaru) and Mizunara hogsheads mixed in. This exciting limited edition is bottled at 51.5% ABV. Upon release it immediately won the Gold Medal for taste at the World Whiskies Awards.

Smartass Corner:
In Japanese, "chibi" means the equivalent of "cute." At the Chichibu Distillery, "chibidaru" refers to smaller quarter casks.

The Flavor Spiral™ shows the most common flavors that you'll taste in Ichiro's Malt Chichibu On The Way 2019 Release and gives you a chance to have a taste of it before actually tasting it.

Nose / Aroma / Smell
The aroma is a fruit bomb with pears and apples up front, followed by sultanas, apricot, and coconut over notes of fresh croissants.

Finish
The finish is medium length with a note like warm dutch apple pie served on a plank of toasted oak.