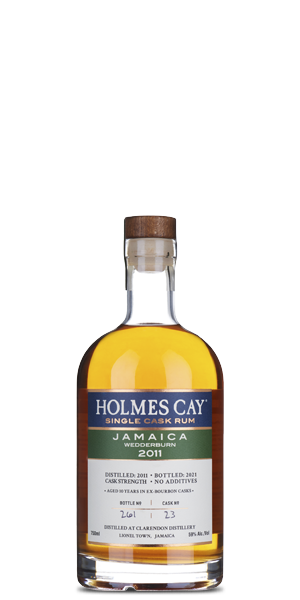 We thought you should know: there are only 1050 bottles and not a single more of this outstanding Pot Still Rum.

If you're really into Rum, then you might have already heard of Wedderburn, a classic Jamaican Rum style. Well, Eric Kaye and his team thought it was pretty neat, so in 2011, they distilled 100% Pot Still Rum in its honor at the Clarendon Distillery, Jamaica. Now, let's break its journey down: it was first tropically matured for 3 years in ex-Bourbon casks in Jamaica, then for 7 additional years in the UK. Finally, it was bottled at 118 proof in New York State in 2021. It's non chill filtered and we haven't even gotten to the best part: there were only 1050 bottles ever made of this outstanding example of medium ester, Pot Still Rum, high on tropical fruit, tobacco and oak flavors.

The Flavor Spiral™ shows the most common flavors that you'll taste in Holmes Cay Jamaica Wedderburn 2011 Single Cask Rum and gives you a chance to have a taste of it before actually tasting it.