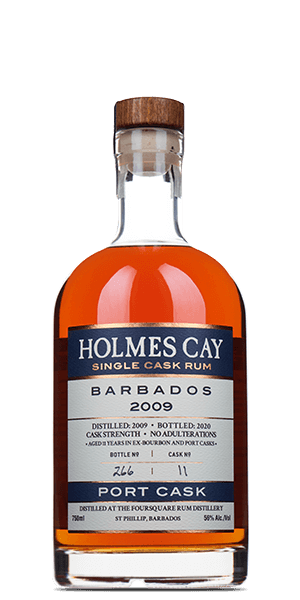 The Barbados 2009 Port Cask Rum is a blend of column and pot-still Rum from Foursquare Distillery that was distilled in ― you guessed it ― 2009. Its first 8 years were spent on Barbados, then another 2 in the UK in Bourbon casks. It was then finished in New York State in Port casks for another year, bringing the total to a respectable 11 years. Rich, deep, and utterly delicious, the Rum was bottled at cask strength. With only 2 casks produced, you better make haste with this one!

The Flavor Spiral™ shows the most common flavors that you'll taste in Holmes Cay Barbados 2009 Port Cask Rum and gives you a chance to have a taste of it before actually tasting it.

Nose / Aroma / Smell
The nose is enticing with dark fruit, chocolate, and a distinct florality.

Flavor / Taste / Palate
It's pleasantly sweet on the palate with honey & caramel. Then there's plenty of oak, as well as more dark fruit ― cherry and plum are in there.

Finish
Finishes dry with oak and dark chocolate notes hanging around for a good, long while.