Distillery
Founded in 1858
Hiram Walker is Canada's largest distiller and blender. Hiram Walker was an American entrepreneur and founder of the Hiram Walker and Sons Ltd. distillery Windsor, Ontario, Canada.

After purchasing land across the Detroit River, just east of what is Windsor, Ontario, he established a distillery in 1858, in what would become Walkerville, Ontario.

Walker built the business to great success, becoming Canada's top export Whisky, and the Hiram Walker & Sons Distillery remained in the Walker family until 1926 when they sold it to Harry C. Hatch.

Founded in 1937, as part of a reorganisation of the Canadian company, Hatch founded Hiram Walker & Sons (Scotland) Ltd. Since then the company has gone through several ownerships, consolidations, and massive acquisitions of major operations, and is now part of Pernod Ricard (France).

The Canadian Club brand is owned by Beam Suntory, a subsidiary of Suntory Holdings of Japan. The Hiram Walker facility has the largest distillery capacity in North America, with 37 fermenters.

They distill 180,000 liters of alcohol every 24 hours, operating 24 hours a day, five days a week. They produce several products including Vodka, Rum, and Canadian Whisky.

The Flavor Spiral™ shows the most common flavours that you'll taste in Hiram Walker Canadian Whisky. It's based on all Hiram Walker drinks in our large database and gives you a chance to taste Hiram Walker before actually tasting it.

Dog Dogson's
Smartass Corner
Hiram Walker and Sons is the only “grain to glass” operation in Ontario.

They have 14 maturing warehouses currently storing 1.3 million barrels of Spirits.
Video from Hiram Walker
Video transcription
Don: Hi. I'm Doctor Don Livermore, I'm the Master Blender for J.P. Wiser's Rye Whiskey, and you are watching stupidDOPE. Whiskey has to be made under 95%, so usually, we strike about 94 and a half. Make corn separately, rye separately, barley separately, wheat separately. Distill it separately, age it separately, put it together at the end. We're opposite of Bourbon, in a sense. That's why they have a job like mine as a Master Blender. It's all about the blending.

Rye is what gives us a character to our product. We get rye from two locations. One is Western Canada, and the other one is the north shore of Lake Erie. Now, the north shore of Lake Erie, it's actually sandy soil, and what is grown there, for the most part, is tobacco. That's the tobacco region of Canada. In order to rejuvenate tobacco fields, they actually use rye. Rye's a grain that grows in crappy conditions. It can actually prevent soil erosion. It's the rye that gives you that spicy bouquet, that spicy nuance. That's why you wanna change the grains around.

We do get, for the most part, Canadian corn. We have been for the last 8, 10 years. Look at corn we smelt some earlier today. Gives you that creamy sweet. The barley's what gives that nutty character to Jameson. Barley is indicative to the style of Irish Whiskey.

Megan: There's some really cool items. Ledgers of company records, salary, grain that was coming in and out, where you're getting the grain from. So there's bottling, production, there's a lot of advertising signs, so they're large-scale.

Don: Pike Creek is a 10-year-old. That was aged 10 years. That is a smooth Whiskey. Quality of wood is more important than age except if you're looking for the character of that green apple ethyl acetate because that's just linear. So there was indeed a brand called Wiser's Red Letter. So this is what I believe what J.P. Wiser would have been giving to his best friends as gifts. They took an audit of the industry in the 1860s, and in that audit how government used to tax people was the grain that was used. So this is my interpretation of what Canadian Whiskey would have looked like in the 1860s. That's the smell of ethyl acetate, that's the smell of age.

Barrels act like a sponge. When I used...once used American Bourbon barrel, it gives me a dried raisin note. That's key for Wiser's Deluxe and J.P. Wiser's Rye. That's part of that point, we want a dried raisin note. In Canada, we can reuse the barrels over and over again. Vanilla caramel toffee comes out very fast. Now in fact in 60 days in virgin oak, I'm gonna get more vanilla caramel toffee than aging in 18 years in a used Whiskey barrel. This is my favorite Whiskey in the world. Do you wanna know what the bottle is? This is the original cooking system of the Gooderham & Worts Distillery. So that's what it would have looked like in the 1840s. Change the grain and you've changed your dynamic. 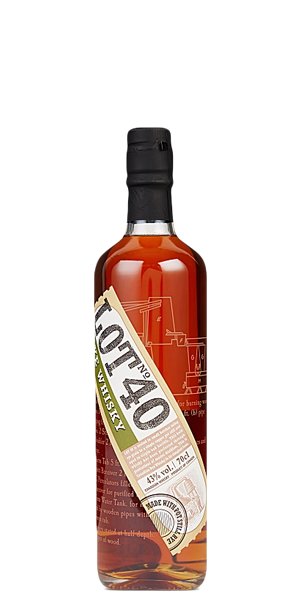