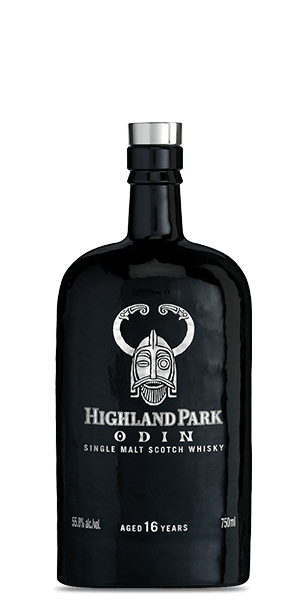 The Elixir Created for Rulers of Asgard.

North from the northernmost point of the Scottish mainland, there are seventy islands of Orkney, of which only twenty are inhabited. On one of them, a son of Vikings started brewing illegal Whisky way back in 1798. When Napoleon was frolicking around Europe, Magnus Euson built his bootlegging empire. Today, on the very spot where Magnus had his stills, a distillery called Highland Park stands and produces fierce whiskies that honor two centuries of history and the Viking heritage. A motley crew consisting of a boatbuilder, an artist, a musician, and a carpenter, captures the land of myths, battered by every element imaginable, and creates expressions so metal we can’t even.

Their black-soul bottling named Odin is the fourth and final release of the Valhalla collection. A dramatic flask (one of only 17 thousand) honoring the Norse God of Hundred Names holds a 16-year-old Scotch that spent most of the time in ex-Sherry casks, being moved to fresh barrels for the last four years. The potion is sweet and powerful – the way a nectar from Valhalla should be.

The Flavor Spiral™ shows the most common flavors that you'll taste in Highland Park Odin and gives you a chance to have a taste of it before actually tasting it.

Finish
Long finish with ginger and cocoa outro and a smoky background.