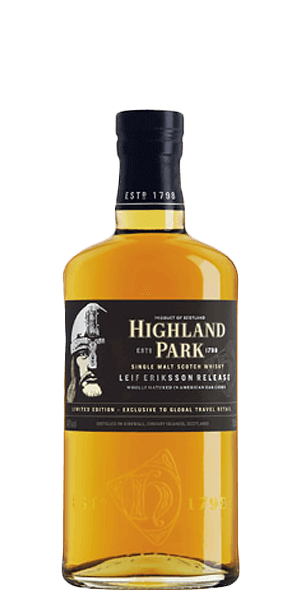 Highland Park is the most northerly distillery in Scotland on the island of Orkney. Legend has it that it was founded by Whisky smuggler Magnus Eunson in the late 1700s and that he used his position as a church officer to conceal Whisky beneath the church pulpit. Don’t assume that “Highland Park” means their Whisky is made in the Highland style. In character, their spirit is closer to a midpoint between Lowland and Islay single malts. Perhaps the most famous Whiskey connoisseur of all time—journalist Michael Jackson—called Highland Park, “The greatest all-rounder in the world of Malt Whisky.”

The Orkney Islands have always had a very strong influence of Norse culture and tradition. Highland Park Leif Eriksson is a tribute to the famous Norse Viking explorer who is said to have been the first European to reach North America — 500 years before Columbus. The Highland Park spirit that bears his name is a delicious NAS single malt originally available only in the travel retail market. Since Leif Eriksson may have “discovered” America, it is fitting that his Whisky is aged in a combination of ex-Bourbon and ex-Sherry casks from there.

Smartass Corner: Highland Park Whiskies are not Highland-style single malts even though they have “Highland” in their name. Highland Park gets its name for a city district on the island of Orkney.

The Flavor Spiral™ shows the most common flavors that you'll taste in Highland Park Leif Eriksson and gives you a chance to have a taste of it before actually tasting it.