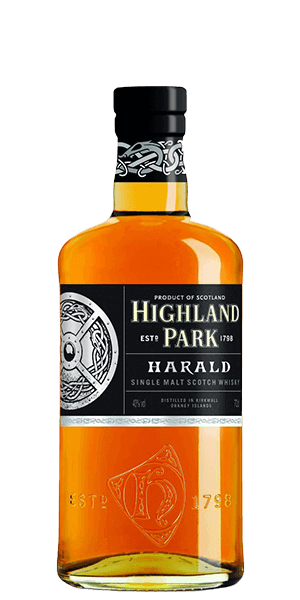 The easy sipper worthy of a king’s name.

Highland Park is the most northerly distillery in Scotland. Legend has it that it was founded by Whisky smuggler Magnus Eunson in the late 18th century. It is said that he used his position as church officer to conceal Whisky beneath the church pulpit.

Don’t think that “Highland Park” means “Highland” Whisky. Highland Park gets its name for a city district on the island of Orkney. In style, it is closer to a midpoint between Lowland and Islay single malts. Perhaps the most famous Whisky connoisseur of all time—journalist Michael Jackson—called Highland Park, “The greatest all-rounder in the world of malt Whisky.”

Highland Park Harald was another in their “Warrior Series” of travel retail special editions. That means it is a full 1L bottle named after Harald Fairhair, the Norwegian king who established Orkney as an earldom. The Whisky that bears his name is aged in a mix of American and European oak casks and — in the classic Highland Park style — the malt is lightly dried over peat. So this Whisky is lighter with a citrus / grassy character and just a wisp of smoke on the tail.

The Flavor Spiral™ shows the most common flavors that you'll taste in Highland Park Harald and gives you a chance to have a taste of it before actually tasting it.

Finish
Again, there is a lightness with a lingering smoke

TERRENCE, Apr 8, 2020
Never met a Highland Park Scotch I didn't like and this is no exception. Very well-balanced and smooth.