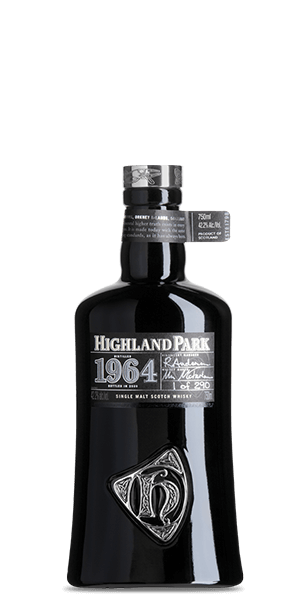 North from the northernmost point of the Scottish mainland, there are seventy islands of Orkney, of which only twenty are inhabited. On one of them, a son of Vikings started brewing illegal Whisky way back in 1798. When Napoleon was frolicking around Europe, Magnus Euson built his bootlegging empire. Today, on the very spot where Magnus had his stills, a distillery called Highland Park stands and produces fierce whiskies that honor two centuries of history and the Viking heritage. A motley crew consisting of a boatbuilder, an artist, a musician, and a carpenter, captures the land of myths, battered by every element imaginable, and creates some of the most fantastic expressions around.

Marching under the banners of the Orcadian Vintage Series, this gem of a venerable Spirit is extremely rare and cherished (only 290 bottles). Back in 1964, two refill hogshead casks began a long and tranquil maturation (nerd facts: they were casks #8737 and #8738). They were awakened in 2009, revealing extraordinarily sweet and spicy harmonies within. The slick black flask hides in an exquisite wooden box (which bears a silver hand-made Highland Park amulet). This bottle is an extremely valuable collectible that will turn your home bar into a rare five-star oasis.

The Flavor Spiral™ shows the most common flavors that you'll taste in Highland Park 1964 Orcadian Vintage Series and gives you a chance to have a taste of it before actually tasting it.