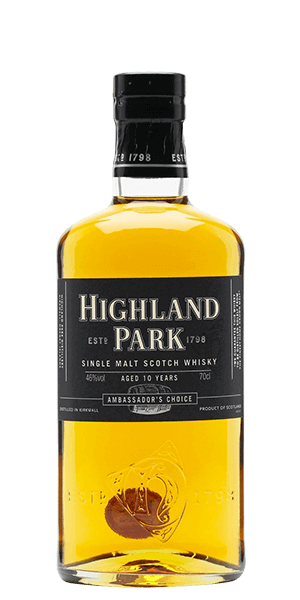 Men and maidens of Midgard, hear the call of thunder and ride the fire of Highland Park 10 yo Ambassador´s Choice!

Situated on the island of Orkney to the west of Kirkwall, Highland Park is the most northerly distillery in Scotland. Legend has it that it was founded by Magnus Eunson in the late 18th century—one of many Orcadian smugglers and illicit Whisky producers who rebelled against the heavy excise duties imposed to finance the war with Napoleon. It is said that he used his position as church officer to conceal Whisky beneath the church pulpit.

Many people think that “Highland Park” means that this is a Highland Whisky. But it’s not. Highland Park gets its name for a city district on the island of Orkney. In style, it is closer to a midpoint between a Lowland and Islay Whisky. It is one of the few distilleries to use hard water and traditional floor maltings on site, which are then dried over a fire of peat from Hobbister Moor mixed with local heather—the national flower of Scotland. This is the source of the floral-smokiness that is characteristic of Highland Park Whiskies. Perhaps the most famous Whisky connoisseur of all time—journalist Michael Jackson—called Highland Park, “The greatest all-rounder in the world of malt whisky.”

Highland Park 10YO Ambassador´s Choice is just that… a special bottling of the classic Highland park single-malt selected by brand ambassador Martin Markvardsen specifically for the Scandinavian market—Sweden, Norway, Denmark, Finland, and the BeNeLux nations. That means that this little northern gem is bottled at a higher ABV—46%—and it is lighter, grassy and … dare we say it… more refreshing than the “normal” Highland Park dram. Why? Well, one assumes that’s because this is the style preferable to the Scandinavians. Skål!

Characteristic of all Highland Park Whiskies is their resistance to using ex-Bourbon barrels. They think not only that the Spanish Sherry casts impart a better flavor, they are smaller, giving the spirit greater wood contact during the gentle, cool-climate aging process. Highland Park Ambassador´s Choice gets every inch of that attention and it is hard to argue with the outstanding results. Thor himself would be proud.

SmartAss Corner
That whole Scandinavian targeting thing is a tad ironic since Highland Park has trumpeted their Nordic influences since day 1. The Orkneys were conquered by the Vikings for a time and this had a lasting impact on the micro-culture of the area. Heck, Highland Park even has special edition Whiskies called Odin, Loki, and Thor for goodness sake.

The Flavor Spiral™ shows the most common flavors that you'll taste in Highland Park 10 YO Ambassador's Choice and gives you a chance to have a taste of it before actually tasting it.

Nose / Aroma / Smell
Grain in the field, grassy, hay and a hint of oranges