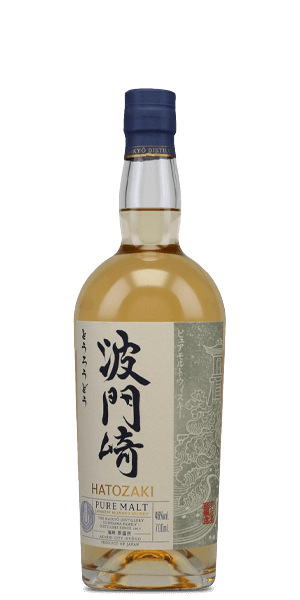 Akashi Sake Brewery has been on Osaka Bay from more than one-hundred and fifty years. As popular as Sake has been for hundreds of years, Whisky is now a cultural touchstone in Japan where they have embraced the Spirit as much as any other place on the planet. They recently expanded on their proud tradition by launching Kaikyo Distillery nearby. To avoid naming confusion, they have launched their first Whisky brand — Hatozaki — along with two signature malt Whisky releases.

Hatozaki Pure Malt Whisky is made from 100% malted barley Spirit — including local distillery inventory and imported Spirit. It has been matured in three different cask types, including ex-Bourbon, ex-Sherry, and Mizunara oak. And as those specifications suggest, it produces a nuanced and layered flavor profile with rich undertones of exotic wood. And it is delivered at a perfect 46% ABV without colorings or chill-filtration.

Smartass Corner#1:
Hatozaki Lighthouse is the oldest stone lighthouse in Japan. It sits at the opening of Akashi Harbor. Built in the pagoda style, it was constructed in 1657. Its official name is "Kyu Hakozaki Torodo" which means "Hakozaki stone lantern house."

The Flavor Spiral™ shows the most common flavors that you'll taste in Hatozaki Pure Malt Whisky and gives you a chance to have a taste of it before actually tasting it.

Finish
The finish is long and warm with a surprising whiff of something smoky at the end of it all.

Jason, Feb 21, 2021
I've been using this Whisky with LoFi Sweet Vermouth in a manhattan... the color is very light, and I call it a Blonde Manhattan. Add a Luxardo cherry, and it's the bomb!

Amber, Feb 7, 2021
Light, sea mist, floral - this is a great way to start a whiskey tasting. Would be great with lighter dishes/fishes. Glad to have a bottle

guest, Jan 22, 2021
Very strong off the bat, but very aromatic and the lasting taste is delicious

Michiel, Jan 2, 2021
If whisky would be acceptable for breakfast this would be my go to choice. Light, fragrant, accessible. A bit of sweetness and spice. Very well balanced.

Raoul, Dec 26, 2020
Light, refreshing, Sea breeze with hint of smoke with fruity notes. Nice Whiskey even thought it's young. Worth a try for sure

Raoul, Dec 26, 2020
Light, fresh smelling, sea breezy with a hint of smoke on the nose. Lovely on the palette for a young whiskey....fruity flavours married with vanilla and smoke... thought it was similar to the Talisker Overall a nice interesting whiskey if you want to try something new.

Stephanie, Dec 26, 2020
Didn’t like the nose but the taste was great, lots of nuanced flavors. Especially enjoyed that hit had a bit of smoke/malt to it but not overwhelming. Enjoyed and would definitely buy a bottle.