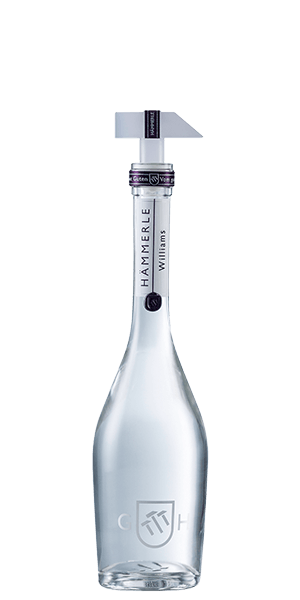 Hämmerle Williams is a contender for best eau-de-vie… bar none.

The Freihof Distillery started as a public house — a rooming house with a pub attached to it — in Austria back in 1885. From there is wasn’t long before they started distilling and flavoring their own spirits. Soon the distilling business crowed out the pub and inn. Since then they have consistently turned out specialty spirits and liqueurs. They pride themselves on avoiding mass market products, choosing to focus on tasty regional and artisanal specialties.

If you make fancy pear Brandy in France, the liquor snobs swoon with delight. But some of the best pear Brandy in the world is made in Austria. But because the Austrian word for fruit brandy is “Schnaps” the spirits snobs often turn up their noses. Don’t make that mistake. Hämmerle Williams is a delicate and delicious pear Brandy — Schnaps — made in the traditional way with superior distillation. The result is a lightly sweet, almost creamy spirit that springs from the eau-de-vie of local pears grown in the alpine mountain valleys near the Freihof Distillery. And we have to say, of all the wonderful Hämmerle branded spirits, this is our personal favorite. It’s simply delectable.

SmartAss Corner:
The Williams pear full name in its native France is “Williams’ bon chrétien.” In North America it is often called the Bartlett pear. Many producers consider it to be the best pear varietal for making Brandies.

The Flavor Spiral™ shows the most common flavors that you'll taste in Hämmerle Williams Pear Brandy and gives you a chance to have a taste of it before actually tasting it.

Shakmat: Your First Taste of Armenia – But Not the Last
>>>
Spanish Inquisition Silver Edition
>>>