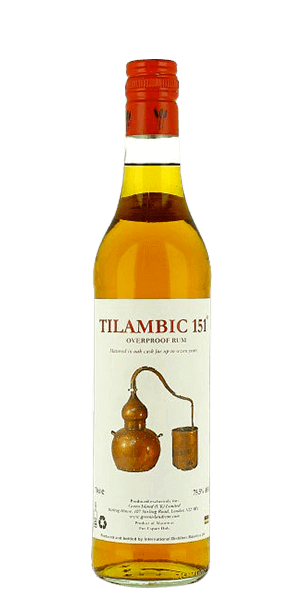 Tilambic 151 Overproof Rum just might send you into orbit.

Mauritius is an exotic tropical island way out in the Indian Ocean. Never been there? Not surprised, it’s kind of hard to get to. But it is about 5000 km south of Dubai and 1100 km east of Madagascar… if that helps. But what’s important is that sailing ships have stopped here to refresh provisions for hundreds of years. And where you have consistent supply of sailors and a tropical climate, you have a consistent demand for Rum. Duh!

So … International Distillers Mauritius Inc. started making high-quality Rums on the island to satisfy the local demand. All you really need to know is that they make really good Rum in that far-away, exotic land.

Tilambic 151 Overproof Rum is—as you may have guessed—bottled at 151 proof. That is a blistering 75.5% ABV. And this Rum is unfiltered too, which means that this wondrous little bit of bottled exotic nectar is made from premium molasses and is aged a full seven years. It tastes like it’s supposed to … like those sailors wanted it. We hear that NASA has contracted their overflow production to launch satellites into orbit.

All those wonderful flavors are packed in tight, but sipping it neat just might send you into orbit too. Line up a few shots of this rocket fuel and you might wake up a few days later with some new awkward tattoos. But Tilambic 151 Overproof Rum is THE PERFECT Rum to make a real man’s cocktail when you actually want to taste the Rum and not just the fruit juice. It’s like injecting pure testosterone into a Daiquiri.

“Tilambic” is actually a Creole-derived word for the small alembic stills used to make craft spirits … perfect for moonshiners. Sailors and traders transferred the term to Mauritius.

The Flavor Spiral™ shows the most common flavors that you'll taste in Tilambic 151 Overproof Rum and gives you a chance to have a taste of it before actually tasting it.