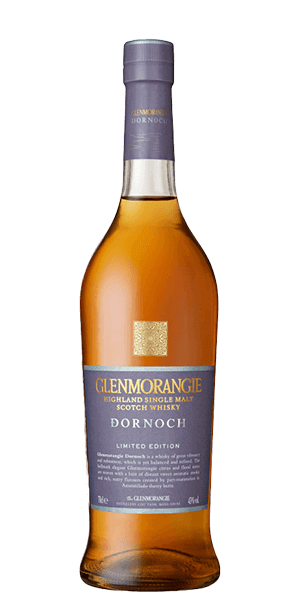 The Glenmorangie Distillery was founded in 1843 when the Matheson brothers converted the Morangie farm into a distillery. It lies just north of Tain, on the wind-swept coastline of Easter Ross. Their stills are the tallest found in Scotland – as tall as a giraffe, apparently – of the same design as those used in the 1880's which were, in fact, second-hand Gin stills. Which means that only the very lightest vapours make it to the top, resulting in a smooth and elegant Scotch Whisky.

Glenmorangie Dornoch is a limited edition dram inspired by the Dornoch Firth, the quaint scenic shores on which the distillery is located. Distillery's owner, LVMH, makes a donation to the Marine Conservation Society for the preservation of this treasured waterway for each bottle sold.

Made exclusively for the travel retail sector, yet available to you guys, the spirit is a no-age statement single malt comprised of a Whisky matured in first-fill ex-bourbon casks and ex-Amontillado Sherry casks. The Whisky itself represents the classic Glenmorangie character, but with an “unexpected dimension that only an Amontillado wood can impart,” as Dr. Bill Lumsden, its creator, describes it.

The dram does justice to the heavenly setting it is supposed to reflect and protect.

The Flavor Spiral™ shows the most common flavors that you'll taste in Glenmorangie Dornoch and gives you a chance to have a taste of it before actually tasting it.

Niclas, May 22, 2016
I really like the Dornoch. The way it sweeps over your tongue like a wave breaking against a shore rock, and then settles in quietly is absolutely amazing. Powerful in its beginning, and mellow in the aftermath. Delicious.