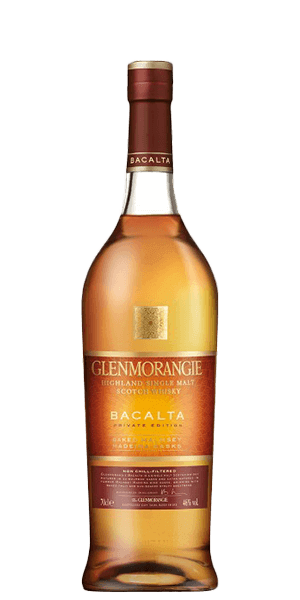 Under the Madeiran sun

According to the legend, the Tarlogie springs in Tain, Scotland, have enabled the production of alcohol in those parts from as early as 1703. It was in 1843, however, that John and William Mathesen founded the Glenmorangie distillery in place of a former brewery. One of the most frequently awarded distilleries in the world, it has been a staple of quality in the world of Whisky ever since, with its unique copper pot stills (the tallest in Scotland), locally-sourced barley, and white oak casks manufactured from wood grown in their own forest in the American Ozarks.

Glenmorangie Bacalta (Scots Gaelic for 'baked') is the eight release of the company's award-winning Private Collection, inspired by Glenmorangie's Madeira Wood Finish single malt that the distillery released some 20 years ago – the first Whisky of its kind. Bacalta is first matured for ten years in ex-Bourbon barrels, then finished for two in bespoke Madeira casks, and finally reconstructed and imbued with the prized sweet Malmsey Madeira. This fruity, honeyed malt, bottled at 46% abv, brings to mind the mellow, sweet scent of days spent under the Madeiran sun.

Smartass corner: Malmsey Madeira is one of the few Madeiras to be produced from white grape, namely the sweet Malvasia variety.

The Flavor Spiral™ shows the most common flavors that you'll taste in Glenmorangie Bacalta and gives you a chance to have a taste of it before actually tasting it.

Rubia, Jul 4, 2018
Nice and clean a light scotch great for the summer

Christian, Jun 4, 2017
Sweet and fruity, very smooth single malt. With a surprising minty feel to the taste at the end. Splendid for cigar smoking. Also, very aromatic when sniffing.