Distillery
Founded in 1876
The Glenlossie Distillery is in the east of Speyside. This distillery is special, because it shares the building with another distillery, Mannochmore.

John Duff, the former manager of the GlenDronach Distillery, built the Glenlossie Distillery in 1876. He managed it until he became more involved with Longmorn Distillery, in 1896.

The other founding partner H. Mackay took the control of the distillery, and until 1919 everything was safe and sound. Distillers Company Limited bought the distillery in 1919, but there was a major fire in 1929, and the distillery was transferred to Scottish Malt Distillers.

In 1971, Mannochmore Distillery was built on the site. In 1990, Diageo acquired the distilleries through a merger and introduced a semi official Flora & Fauna bottling.

Glenlossie uses the Bardon Burn as water source for production. There are 3 pairs of pear shaped stills, having capacities between 15,600 and 13,500 liters respectively. The spirit stills use a 'purifier' between the lyne arm and the condensers.

The purifier acts as a mini-condenser, which returns a portion of the alcohol vapours back to the pot, to be re-distilled. The malting site is located in Elgin, namely Burghead Maltings. The malt is slightly peated. The Ren dunnage warehouses can hold up to 200,000 casks in total.

The Flavor Spiral™ shows the most common flavours that you'll taste in Glenlossie Scotch. It's based on all Glenlossie drinks in our large database and gives you a chance to taste Glenlossie before actually tasting it.

Dog Dogson's
Smartass Corner
There is not a single official bottling for Glenlossie.

Glenlossie Distillery had its own platform at the Elgin-Perth railway.

Most of the made Whisky is used for Diageo's blends.
About
Speyside
Glens a plenty, history in abundance - that's Speyside. 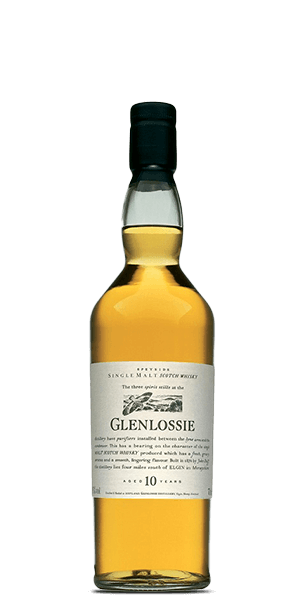