Distillery
Founded in 1872
Glengyle Distillery was founded on the corner of Glebe Street and Glengyle Road, in Campbeltown. Glengyle has a pretty strange history.

It was founded by William Mitchell in 1872, who was an old employee of Springbank Distillery. Economic crisis hit the distillery in 1919, and after two takeovers, they eventually closed in 1925.

The premises were lent to rifle clubs and farmers. Despite the fact that the distillery was unused, the buildings were well preserved. Two unsuccessful attempts were made by the Bloch Brothers and Campbell Henderson, to revive the distillery by 1957.

In November 2000, the second nephew of Mitchell, Hedley Wright, bought the distillery and started a thorough clean up. Mills and stills were bought from different distilleries, and in 2004, the first spirit ran through the spirit safe after 79 years.

Glengyle uses stills from the Ben Wyvis Distillery, and mills from the Craigellachie Distillery. They also have 4 washbacks of 30,000 liters. Production started with experiments like the Kilkerran In Progress project. In August 2016 they released their first 12YO.

Dog Dogson's
Smartass Corner
Glengyle Distillery was the first distillery that was opened (actually reopened) in the new millenium.

Glengyle is using the name Kilkerran for its Whisky, since the name Glengyle is currently copyrighted by a blend Whisky company.
About
Campbeltown
The unspoiled peninsula of the Campbeltown region used to be home to 34 Whisky distilleries, but now boasts only three coastal Whisky producers.

Despite the region’s contraction, the malts produced are fiercely enduring and distinctive. Wet wool, salt, smoke, fruit, vanilla and toffee are embraced, abandoned and cocktailed in the various malts of Campbeltown. 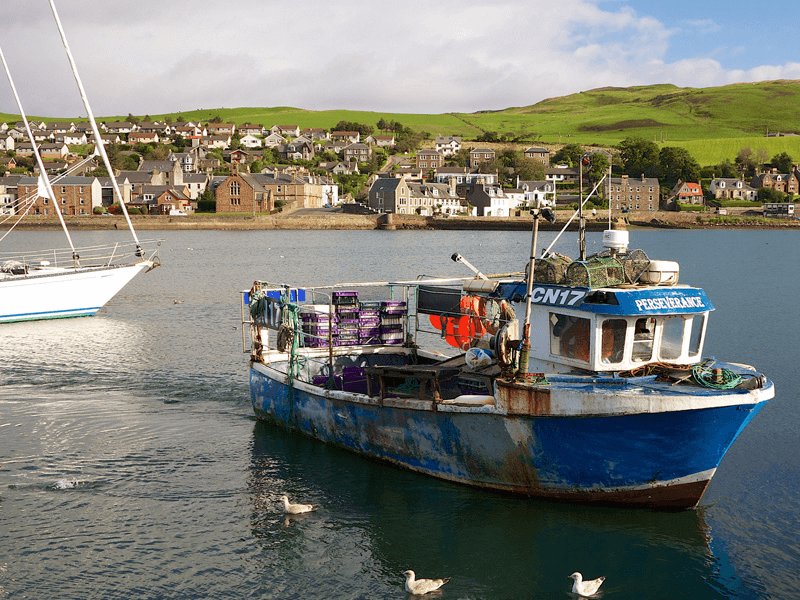 Video from Glengyle
Video transcription
My name is Gavin McLachlan. I'm born and bred in Campbeltown. My job is to look after Springbank Distillery and Glengyle Distillery. The bottle that we source for Glengyle and Springbank Distillery is from the East Coast. They say it's a better climate up there. And recently, we've been using Concerto, but in past times we were using Optic. They say that's the best for brewing and distilling. We'll get a lorry, come for the East Coast. It's usually about 27 and a half tonnes of barley. They're [inaudible 00:00:40] at the back of the distillery. There's two barley silos that hold 60 tonnes. And then twice a week, we do two floors, the first floor being 12 tonne, and the second floor being 10 tonne. So it will lie on the floor for about a week. They'll be grubbed and turned as germination starts. Because if you just leave it, it'll start knitting together and all the floor will be wasted. So the boys on shift will grub it once, turn it once during a shift, keep it nice and loose, and control the temperature which is done by the windows.

After the week, there are the malts. It's actually green malt now, and it's ready to go from the floor to kiln. It goes to the kiln by elevator, and it's probably about 45% moisture, which will be dried down to 45% moisture after kilning. Glengyle malt is made with six hours peat, and then [inaudible 00:01:33] and air until dry to 45% moisture. So after, we've got to take the malt and barley now to Glengyle Distillery. This process is carried out with a tractor and trailer. And then on arrival, there will be an auger in the yard at Glengyle, which will take the malt and barley through another auger, and keep it in the malt bins at Glengyle.

We do five mashes a week. Each mash consists of 4.2 tonnes of malt, of grist now after it's been through the milling process. The first and second wort we keep for the fermentation, which goes to the washbacks, and the third wort is kept for the next mash. Each mash probably takes between six and eight hours. Comparing that with Springbank, it'd probably between 9 and 10 hours. The reason being the simulator tun has got the rakes, so it's cutting about all the time in the [inaudible 00:02:32] of the wort to [inaudible 00:02:34] through it quicker.

So now you've got 21,000 liters on average in the washback. The still man or the mash man will add three bags of distillery [inaudible 00:02:46] yeast totaling 75 kilos. That will now start converting the sugars into alcohol. And so when I was always [inaudible 00:02:55] in front, I'll tell you, it's like a wee Pacman, just going out and gobbling up all the sugar, converting it into alcohol. The fermentation time at the Glengyle is a minimum of 72 hours and a maximum of 110 hours. The longer the fermentation time, the fruitier spirit you get. So after fermentation time, you have now got a liquid called wash, which is probably between 4% and 6% alcohol, and is now ready to be transferred to the wash still. It's a typical Scottish standard double distillation, and probably the process will maybe take between five and seven hours. It's boiled up, and it's collected, and it's [inaudible 00:03:36] up, and it comes through as low wines. And the strength of a low wine's approximately is about 23% alcohol. And then it's collected in the low wines and feints receiver.

The second stage of distillation...now, you've collected all your low wines in the low wines and feints receiver. That's now transferred into your spirit still. It's boiled up, and then it comes down to the safe. And the first [inaudible 00:04:03] at Glengyle, actually you have four shots and bad spirit you don't like. We don't take that. And then after 30 minutes, we've got a middle cut, which is a head, heart. The heart piece is what you want, and it will probably come in and distill about 68% to 70% alcohol.

After we've collected enough spirit in the intermediate spirit receiver just below the [inaudible 00:04:25], it is then transferred to the SRWV, which is located just outside the main door at Glengyle. The strength of the spirit will be roughly 71% alcohol, which then, before we fill into a cask, we will add Crosshill Loch water, which is our water source, and it will be reduced down. It's actually 3.5 before it's filled down to cask for the next 10 years, etc.

At Glengyle Distillery, we use three types of casks. We've got Sherry butts, Sherry hogsheads, and Bourbon barrels. After the casks have been filled at Glengyle, they are then transported by tractor and trailer back to Springbank Distillery where they'll be safely kept in the warehouse until they're required for use. We've got five dunnage warehouses and two rack warehouses at Springbank Distillery. The dunnage warehouse, to tell you the difference, is just casks with a layer of stick and then a cask on top, just the traditional storing. Whereas in the rack warehouses, it's all metal racks, and they're all stored on top of one another in a rack system.

After the Whisky has been in the warehouse and maturation is complete and we require the Whisky, the Kilkerran single malt will come to the bottling hall. We do not caramelize at the Glengyle Distillery, so everything comes in natural, and so much light and dark, as you can imagine, from the Sherry, and the Bourbon gives it a color consistency. It will then be reduced down to 2% higher than bottling strength, put back in a cask to marry with the water for up to six months, and then it will return to the warehouse. And then when bottling hall manager [inaudible 00:06:08] requires it for bottling, they will then go get the cask from the warehouse and take it to the bottling hall for bottling.