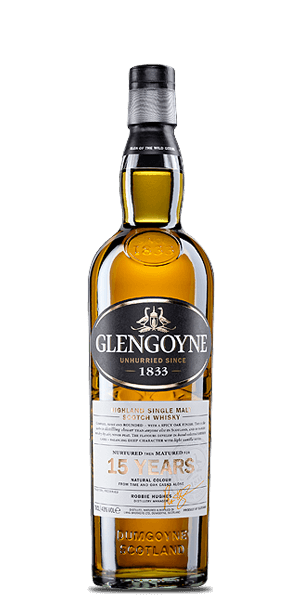 A bright and fresh Glengoyne Single Malt that brings you as close to the grain as possible.

Originally called “Burnfoot Distillery,” George Connell officially started Glengoyne in 1833 — after the Excise Tax Law of 1823 made it cost effective to do so. The fact that good old George had been hauling full casks of Whisky out of the tree-lined glen since 1820 is purely a coincidence. Anyway, the point is that they have been making Single Malt Whisky here for a long time. Famously, they say the Glengoyne distilling process takes longer than any other in Scotland in order to deliver their unique richness and character.

Glengoyne 15 Year Old Single Malt has an interesting twist to its story. The aging formula is straight forward — fifteen years in a combination of ex-Bourbon, ex-Sherry, and refill casks. But the twist comes at the beginning where the malted barley is air dried. Not peat, no burners, no gas, just air. That process is a LOT slower then modern powered drying machines or any sort. But thats the point. You are not only tasting a well-aged, balance dram of Single Malt wonderfulness, you are sipping a more pure expression of the grain itself… and we think that it's pretty cool.

The Flavor Spiral™ shows the most common flavors that you'll taste in Glengoyne 15 Year Old Single Malt and gives you a chance to have a taste of it before actually tasting it.

Nose / Aroma / Smell
Lemons shine in the fragrance with added notes of curd and oatmeal.

Finish
The finish is bright and fresh.

William, Aug 6, 2020
Incredibly smooth and a great option for a scotch lover that isn't as into peat.

guest, Mar 14, 2020
Very good scotch smooth, like it a lot and was, visited the distillery after I found it. Down side is that the price has almost doubled everywhere since.

Lewis, Jul 2, 2018
Solid Highlander in the sour/meaty tradition of Craigellachie. Cured meat, malty sweetness, a touch of bitterness. Demands 10-15 mins in the glass before it opens up.

Russ, Apr 28, 2018
A very smooth whisky. Prominent notes of butterscotch in both the nose and palate. A very popular dram every time I have brought it out.

Piotr, Feb 24, 2018
Rich, beautiful nose. Fantastic finish, quite surprising in comparison to the smell, oak, oak. I love oak finish. A little spicy and dry but sweet (really like this oppositions) could be a little sweeter, but maybe I have one of these “sweet days”...

Mark, Feb 3, 2018
For the price point really smooth and easy to drink neat. The taste doesn’t blow me away, but good for casually sipping. I strongly recommend going on a tour of their distillery and some of the later years are amazing.

guest, Nov 19, 2016
I read a lot about this bottle before buying. Maybe I was expecting too much. It's OK, but not remarkable.