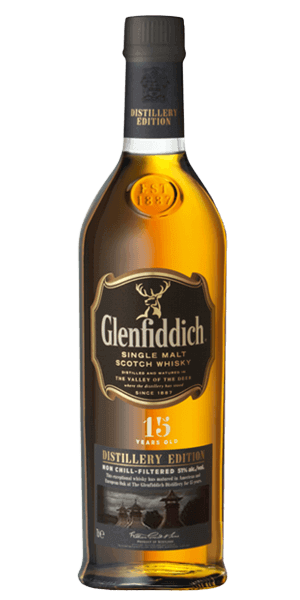 Glenfiddich, probably the world’s most famous distillery, was founded in 1876, with the first spirit running of the stills in 1887. It has since then established itself as a definite crowd favourite and the number one selling single malt in the world. With a production capacity of more than 10 million litres of alcohol per year it is both the largest distillery and the world’s most awarded single malt.

Interestingly, the Grant family, who started the company way back when, still owns it to this day. One of the major reasons behind the burgeoning success of the 20th century stems from the fact that they were the first distillery to introduce single malt Whisky to the international stage. The company has a range of malts of all ages, each with their own set of specific fans.

Lucky for you ‘Fiddich fans out there, we have another strong contender to be your new favourite dram. And when we say strong, we really mean strong as an ox. Glenfiddich 15 Year Old Distillery Edition is definitely not for the faint of heart, since it packs one hell of a punch at 51 % ABV. Matured in a mixture of traditional American and European oak, is not chill filtered to protect all its subtle flavours. Exactly as it was made in the cask.

The beauty of this Whisky is that it doesn’t pretend to be flashy and posh. No extravagant labelling, no pretentious story. Just a good old-fashioned Glenfiddich we know and love, stripped to the bone. The classic everyday dram.

The Flavor Spiral™ shows the most common flavors that you'll taste in Glenfiddich 15 Year Old Distillery Edition and gives you a chance to have a taste of it before actually tasting it.

Matthew, Apr 14, 2018
This is probably on of the least peaty whiskeys I’ve had I think it’s great but glenfiddich is stil a little more Smokey Than Glenlivet/ I killed this bottle Way Too fast - shame on me

Brian, Nov 21, 2017
Love this one. One of the best Ive had. Too price to be an everyday drink, but it comes out on special occasions

Mariano, Nov 1, 2017
So far, so strong, so good. Found it quite similar to the Macallan 12 Sherry’s. A bit more alcoholic, but sherry strength lovers would fav this one.