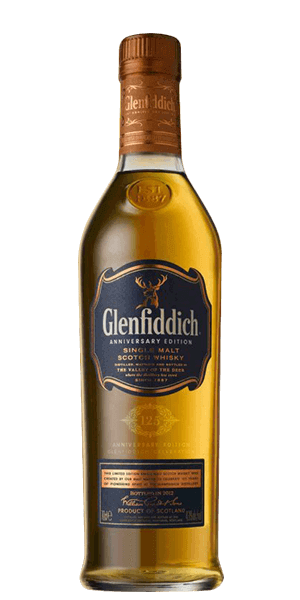 The world’s most famous single malt, you have yet to try.

Glenfiddich, probably the world’s most famous distillery, was founded in 1876, with the first Spirit running of the stills in 1887. It has since then established itself as a definite crowd favourite and the number one selling single malt in the world. With a production capacity of more than 10,000,000 litres of alcohol per year it is both the largest distillery and the world’s most awarded single malt.

Interestingly, the Grant family, who started the company way back when, still owns it to this day. One of the major reasons behind the burgeoning ´Fiddich success of the 20th century is due to the fact that they were the first distillery to introduce single malt Whisky to the international stage.

Glenfiddich 125th Anniversary Edition is the ultimate testimonial to its 125 years of trailblazing ways. This particular bottling emulates the way Glenfiddich was made back when William Grant first started out making his own firewater. Brian Kinsman, only the sixth Malt Master in the company history, has created an old-school Speyside Whisky using traditional techniques developed by his famous forerunner.

The result is something completely unique – a peated Glenfiddich! Yes, sir. The smokiness comes from the marriage of peated and unpeated Glenfiddich of different ages matured in variety of casks, all of which give the Whisky a special kind of depth and complexity. This luxury anniversary bottle comes included with a certificate of authenticity and a backstory leaflet.

It’s one of those collectable Whiskies you want to save and treasure, but need to taste for pleasure.

The Flavor Spiral™ shows the most common flavors that you'll taste in Glenfiddich 125th Anniversary Edition and gives you a chance to have a taste of it before actually tasting it.