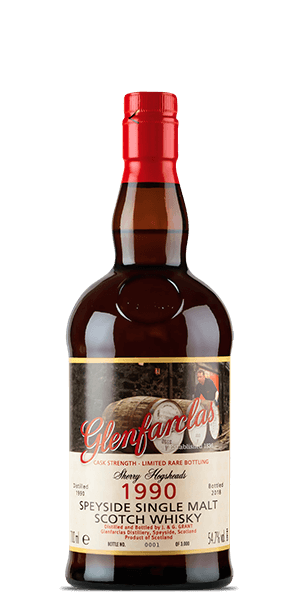 The 90s called: they have a Whisky for you.

They say that fathers build, sons expand, and grandsons destroy. But with Grant family of Glenfarclas it's different: every new generation made the Whisky-making business stronger while keeping the ancient recipe intact. They are one of the few remaining independent and family-owned distilleries in Scotland. It all started in 1836 by Robert Hay, and bought by John Grant a few decades later. Nowadays it's run by the 6th generation of the Grant family, who own six stills, which are the largest in all of Highland, and produce a typical Speyside-style Whisky, which is heavily Sherry influenced. They mature their malts in traditional dunnage warehouses, where they have stock back to 1952.

This very bottle, the lavishly exclusive vintage from 1990 (only 3000 bottles made), part of the Family Casks range, is an unbelievably rich and complex expression only tradition, time, and a good old Oloroso Sherry Hoghshead can create. Have we mentioned this graybeard is goddamn complex? A harmony of Sherry, Oak, fruits and a hint of smoke is exactly what one expects when opening a grand vintage Whisky.

The Flavor Spiral™ shows the most common flavors that you'll taste in Glenfarclas Vintage 1990 and gives you a chance to have a taste of it before actually tasting it.

Flavor / Taste / Palate
A harmony of fruit, spices and wood with a wonderful company of fruity sweetness.