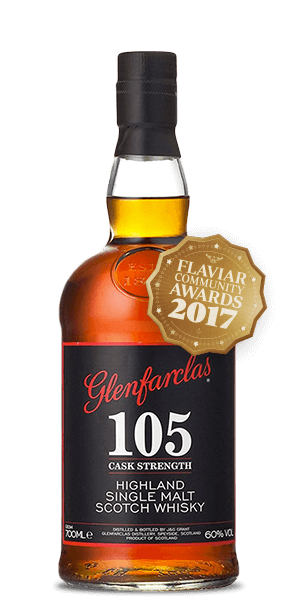 Widely recognized as one of the few distilleries to have been owned by the same family for 150 years, as well as producing single malts of exceptional quality, Glenfarclas is one of the most universally beloved Whiskies.

was started in 1836 by Robert  and bought by John Grant a few decades later. Nowadays it's run by the 6th generation of the Grant family, making it truly independent, which is kind-of refreshing these days. Glenfarclas distillery owns six stills, which are the largest in all of Highland, and produce a typical Speyside-style Whisky, which is heavily Sherry influenced. They mature their malts in traditional dunnage warehouses, where they have stock back to 1952.

The Glenfarclas 105 is a deep Whisky with Sherried undertones. This smooth Golden Liquid is complimented perfectly with a little drop of water, to really allow the palate to get to the depths of the taste. In 2004, it was named Malt Maniacs “Bang for your buck”, a testament to its quality and affordability.

It was the winner of the Flaviar Community Award 2017 in its respective category!
Tasting notes

Flavor / Taste / Palate
Rich, warming, malty, young and  with a lot of sherry and a bit of chocolate.

Finish
Amazingly smooth for the strength; wonderfully warming and with a lingering smokiness, yet very rounded.

The Flavor Spiral™ shows the most common flavors that you'll taste in Glenfarclas 105 (1L Bottle) and gives you a chance to have a taste of it before actually tasting it.

Jure, Dec 7, 2020
Decent bottle. Taste is quite pleasant but at the least let it breathe. Adding some water does it good. Absolutely great value.

Giuliano, Nov 15, 2020
Not to be trifled with! Makes a great dram when you let it breathe properly, otherwise it can pack quite a kick. Spicy notes definitely prominent, especially when you let it rest a bit. Absolutely great overall and definitely recommended if you feel brave enough!

Steven, Oct 21, 2020
Overly strong and smoky, burns worse than the Ring of Fire.

Juho, Oct 18, 2020
Quite nice caramel taste with single ice added to glass. Alcohol will have after taste and punch.

Staffan, Aug 14, 2020
A perfect malt when you add a fair amount of water to make it last

Daniel, Jul 16, 2020
Its 60% and on first taste, you get every single %! Kicks like an absolute mule ... but if you pour a dram, leave it to settle for a little while, you get to taste what is actually a very nice whisky. It lacks a little smoothness (as you should expect for a 60%), but treat it with respect and focus on the sherry cask flavours, you'll enjoy it. In many cases, a few drops of water open up the whisky, but I thought the addition of water hindered this one. Just let it breathe and enjoy it how it comes. Also , at £48 for a litre, you get really good value!

Zsolt, Jul 6, 2020
Amazingly rich and bold whisky. The high proof might put some people off, but is definitely one to have. Just be careful as one glass is usually more than enough.

Joseph, Jul 6, 2020
A warming whiskey with a wonderful initial taste. However it is very strong and one glass is enough!

Aaron, Jun 16, 2020
Gorgeous if you can handle it but can definitely throw you around the room if you aren't used to such high proofs. Once you fight through the proof though, its a lovely dram. Oaky, nutty and with a touch of caramel about it, loaded with fruity flavours too but still fairly dry. Its a very assertive tipple though, so I wouldn't expect to have it as a daily drinker unless you have loads of experience with high proofs/

CINDY, May 2, 2019
VERY WARMING! Need a snowy night and fireplace or friendly warm country tavern to complete the experience.

Glen, Nov 2, 2018
A beast of a dram, not to be played with. I found notes of sweet dried fruit with a long finish on the plate. As it is not cold filtered the addition of cold or iced water will turn it cloudy, makes it fuller in the mouth.

Michael, Oct 21, 2018
Peppery sherry bomb with a long, very dry finish. The sweetness is nice, but the pepper and dryness dominate.