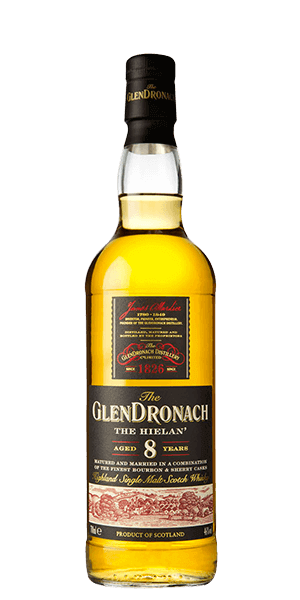 The GlenDronach The Hielan 8 YO

If you were to draw a target to bulls-eye what a Highland, Single-Malt Whisky should be it would be shaped like Glendronach 8 YO Hielan.

The Glendronach Distillery was founded in 1826 by James Allardice whose name is still proudly displayed on the bottle. They are smack dab in the middle of the Highland action. Over the nearly 200 years of their history, this traditional distillery has been bought, sold, and traded more times than a Chicago politician. But in 2008 they were finally rescued by the BenRiach Distillery Company — God bless ‘em.

The Glendronach currently has 14 Single-Malt expressions in their core line up. Yes, they have won a lot of awards. But the best award — and the only one you probably care about — is that they have a devoted cadre of followers who make a Spirit of The Glendronach line their own, personal, daily dram.

In the Doric dialect of Gaelic, Hielan means "Highland"… makes sense, right? And that is EXACTLY what you have here — a classic Single-Malt expression from the Highlands. Eight years old, aged in Bourbon and Sherry casks, bottled at the magical 46% ABV, never chill-filtered, no artificial colors. Boom!

If you were to draw a target to bulls-eye what a Highland, Single-Malt Whisky should be it would be shaped like The Glendronach 8 YO Hielan. Everything is spot-on with a creamy texture to boot. Cheers to the men of The Glendronach!

The Flavor Spiral™ shows the most common flavors that you'll taste in The GlenDronach The Hielan 8 YO and gives you a chance to have a taste of it before actually tasting it.

Ardbeg
Uigeadail
Scotch
8.6/10
$74.99
Ratings & Reviews
Member Reviews and Ratings of The GlenDronach The Hielan 8 YO

guest, Jan 15, 2016
Occasionally shows trickles of its youth, but otherwise a finely layered collection of flavors. Very promising from Glendronach.