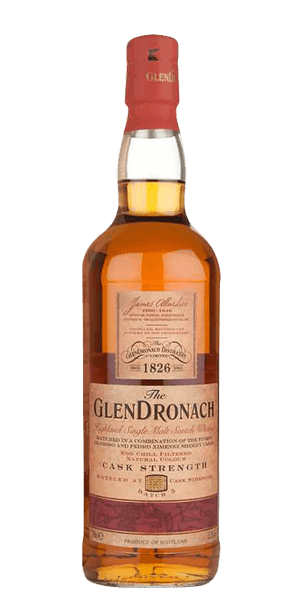 It says Strength, do we need to say anything else.

The GlenDronach Distillery was founded in 1826 by James Allardice whose name is still proudly displayed on the bottle. They are smack dab in the middle of the Highland action. This traditional distillery has been bought, sold, and traded more times than a Chicago politician in their good two centuries of existance. In 2008, they were bought from Pernod Ricard by the BenRiach Distillery Company.

The GlenDronach currently has 14 Single Malt expressions in their core lineup. Yes, they have won a lot of awards. But the best award — and the one you probably care most about — is that they have a devoted cadre of followers who make a Spirit of The GlenDronach line their own, personal, daily dram.

The entire GlenDronach range is the perfect example of fine, Highland, Single Malt Whisky. The GlenDronach Scotch Single Malt Cask Strength is all of that and more — more premium casks, more ABV, more flavor, and we always want more of it.

They take their core Single Malt Spirit and age it in a combination of Pedro Ximenez and Oloroso Sherry casks. That is not a mistake… it’s not "finished" in those expensive "made in heaven" barrels, it is fully aged in them from day one. And where their normal Whisky — awesome in its own right — is bottled at 46% ABV, this is bottled at a 55.3% cask strength. That means you get it all like you were drinking it right out of the cask.

The Flavor Spiral™ shows the most common flavors that you'll taste in The GlenDronach Cask Strength Batch 5 and gives you a chance to have a taste of it before actually tasting it.