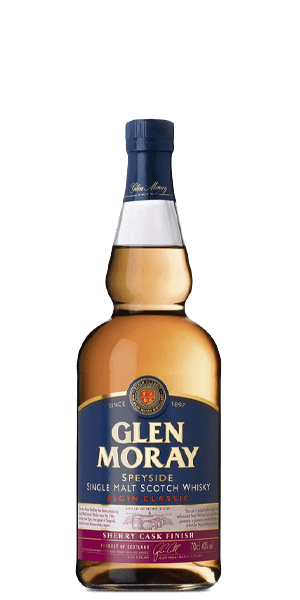 Glen Moray was born as West Brewery run by Robert Thorne & Sons. It was converted into a Whisky distillery in 1897. From the very start, quality has been job one. The dedication and "authenticity" of Glen Moray’s Single Malt production is just about as good as it gets — changing very little over their 120 years of production on the same spot. The distillery sits on the banks of River Lossie in the Royal Burgh of Elgin — the historic capital of Speyside — and the road into town passes directly through the distillery grounds. Today they are owned by French Spirits company La Martiniquaise and all of the production goes into their range of fine Single Malts.

As it should, Glen Moray Sherry Cask Finish begins as their signature Single Malt Spirit. After primary aging in ex-Bourbon casks it is transferred to hand-selected Oloroso Sherry casks from Jerez, Spain. This adds additional notes of dried fruits and a deeper nuttiness on top of the apple and lemon notes in the signature flavor profile. It’s a delicious dram with an approachable easy-to-love demeanor.

Smartass Corner:
Throughout its entire history, the Glen Moray Distillery has had only five distillery managers. Each has personally trained their successor, passing on the secrets of the Spirit.

The Flavor Spiral™ shows the most common flavors that you'll taste in Glen Moray Sherry Cask Finish and gives you a chance to have a taste of it before actually tasting it.

Nose / Aroma / Smell
The fragrance has notes of sultanas and medjool dates over milk chocolate and butterscotch creams.

Finish
The finish is medium-length with lingering baking spice.