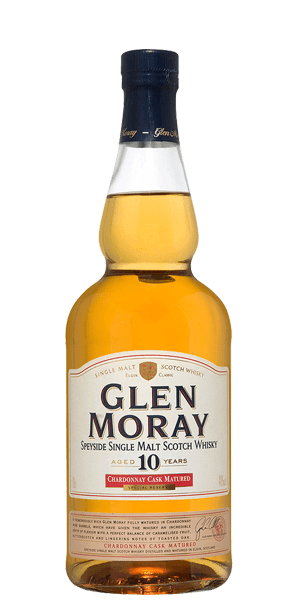 The Daily Dram from Speyside.

The authenticity of Glen Moray’s single malt production is as good as it gets. Everything has been done the same for over a century here on the banks of River Lossie in the Royal Burgh of Elgin – the capital of Speyside. The road into town passes through the distillery grounds, where executions were carried out until the end of 17th century. Much has changed, except the uninterrupted process from raw ingredients to the final dram.

The Glen Moray 10 Year Old Chardonnay has been fully matured (not merely finished) in ex-Chardonnay cask for a decade in Speyside, Scotland’s most honoured Whisky producing area. This is a serious Single Malt Scotch, as we like to say, and it has a lot to offer. Even for those with a more exquisite taste.

The Flavor Spiral™ shows the most common flavors that you'll taste in Glen Moray 10 Year Old Chardonnay and gives you a chance to have a taste of it before actually tasting it.

Finish
Stretched dry with a good harmony after a sweet introduction.

Comment
A real bang-for-the-buck bottle of Scotch this is.