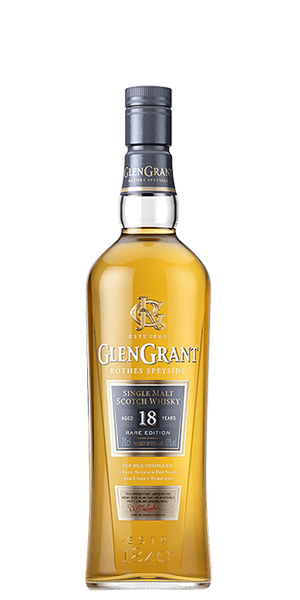 Glen Grant was founded by John and James Grant—brothers who had been making their living by means of illegal distillation and smuggling. But with a desire to settle down a bit, they finally took out a license in 1840 becoming “legal” for the first time. They met with a bit of success, but things really took off when the operation was taken over by James’ son—James Jr.—who brought enthusiasm, intelligence, and energy to the company … literally, since he wired the place and made Glen Grant the first distillery with electricity.

Young James went by the nickname “The Major” and he was always embracing new ideas. He was the first man in the Highlands to own a car, for goodness sake. But one of those new ideas was incorporating taller, narrow stills and purifiers to improve the quality of the Whisky. Some say that this gave the Glen Grant single-malt its lighter, grainy character and influenced what it means to be a Speyside single-malt to this day.

This single malt is a dream. Aged for at least 18 years in the finest hand-selected oak casks, this Spirit is radiantly golden with seductively floral and oaky aromas. This whisky is complexly nuanced, with rich and vibrant flavors of malted caramel, vanilla, and dried fruit, followed by a long, sweet and spicy finish.

The Flavor Spiral™ shows the most common flavors that you'll taste in Glen Grant 18 Year Old Rare Edition and gives you a chance to have a taste of it before actually tasting it.

Finish
Long and sweet with hints of nuts and spice

Solomon, Aug 22, 2020
I bought this bottle, and really, really wanted to like it. I appreciate the complexities and some of the flavors, but for whatever reason I just did not really enjoy it and I know that I am in the minority. There's an underlying bitterness that is mild but permeates the nose, taste and finish. In addition some of the positive attributes such as the spice - which is quite nice - come in a bit faint.

Jared, Jun 11, 2020
Not my favorite. I can very much appreciate how clean this whisky is. None of the sherry or port finishes. Just a solid representation of a Speyside.

Kristinn, Dec 2, 2019
I love it, mild with complicated tastes in perfect balance.

Raoul, Apr 27, 2019
It is a good whisky, not an otherworldly one. Used to drink several 95+ whisky’s as rated by Jim Murray this was a disappointing experience. Maybe I have to drink it several times before I start to appreciate its qualities? To be retasted and (hopefully) revised.

Burk, Aug 7, 2018
The most wonderful mixture of caramel and hints of vanilla I’ve experienced. If you love scotch, y only suggestion is... if you see it buy it!

Vincent, Jan 9, 2018
flavors of cinnamon, apple and touch of vanilla. Smooth with a subtle burn on the back end.
Load more reviews