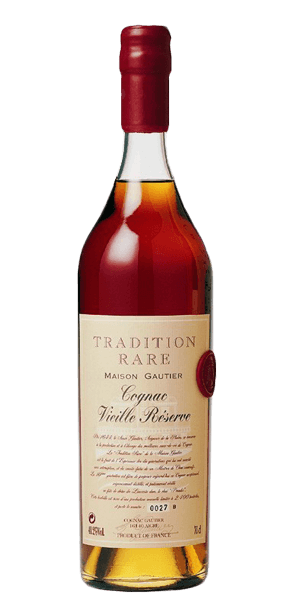 Charles Gautier, a maker of high quality oak casks happens to marry the daughter of a wine producer. A love story that lasted for a long while. Gautier is one of the oldest Cognac houses, one that was family owned and operated for 10 generations, until 1995. Gautier’s cellars are located above the river Osme in Aigre also called “little Venice” of Charente, resulting in a level of humidity that provides very favourable maturing conditions.

Gautier Cognac XO Tradition Rare is a blend of Gautier's oldest Cognacs (Eaux-de-Viex), taken from their Paradise Cellar (chai paradis), which has been handed down over 10 generations of the Gautier family. It's a limited release, with a annual production of only 2400 bottles - that is extremely limited, just FYI. Won Gold and was BEST IN CLASS at the International Wine & Spirits Competition in 2011. Obviously, a Hors d'âge or "beyond age."

The Flavor Spiral™ shows the most common flavors that you'll taste in Gautier Cognac XO Tradition Rare and gives you a chance to have a taste of it before actually tasting it.

Finish
Long and consistent, a characteristic of good old Cognac.