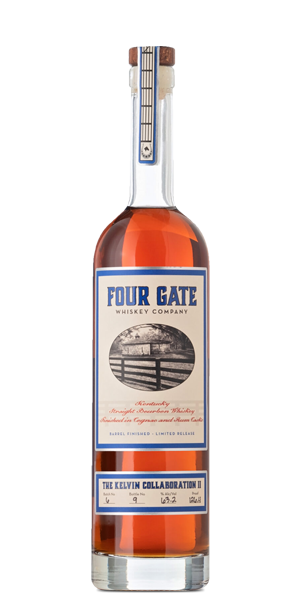 We’re here to tell you that remakes can be good. Excellent, even.

After their first release of barrel finished Whiskey was so warmly received in 2019, Four Gate decided to use that very same mash bill for the Kelvin Collaboration numero due. But, as always with this forward-thinking distillery, there’s a twist. This time, the 12YO high rye Kentucky Straight Bourbon Whiskey was filled in three massive Cognac barrels and a selection of Dark Rum barrels that came from the same Rum distillery as for batch numero uno. Oh yes, a Straight Bourbon Whiskey finished in Cognac and Dark Rum casks. We’re not usually in favor of remakes (especially in movies, but we’re too classy to give any titles), but this is a worthy inheritor of the iconic Kelvin Collaboration. Non-chill filtered at 126.4 proof, there are just 2,574 bottles of this one-of-a-kind spicy sweetness out there.

The Flavor Spiral™ shows the most common flavors that you'll taste in Four Gate The Kelvin Collaboration II Batch 6 and gives you a chance to have a taste of it before actually tasting it.

Finish
Medium-long, the Rum and barrel tannins linger in a sweet yet oak-filled experience.