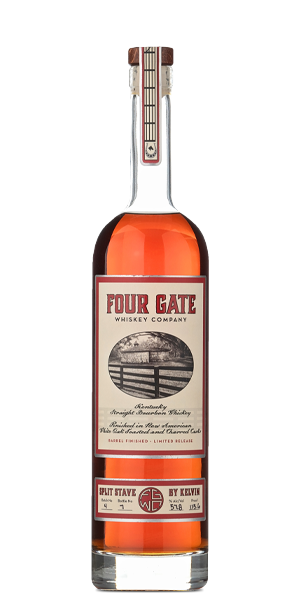 Buyer Protection
Money-back guarantee if things go wrong.
Sometimes you need to break things (or, casks) apart so you can put them back together.

For their fourth release, Four Gate Whiskey quite literally thought outside the box. Together with William Hornaday at Kelvin, they crafted a series of medium toast casks, a series of #2 char casks and one of #4 char casks. After the job was done, they broke them all apart and rebuilt them, mixing the toasted staves and #2 char staves on some and toasted with #4 char staves on others. Meet the first ever, Split Stave barrels. Now, fill them with a blend of 5.5YO Kentucky Straight Bourbon and a 12YO Kentucky Straight Bourbon, let them rest for five months and you get Four Gate Split Stave by Kelvin. Uncut and unfiltered at 115.6 proof, there were only 2,700 bottles of this unique Bourbon released.

The Flavor Spiral™ shows the most common flavors that you'll taste in Four Gate Split Stave By Kelvin Bourbon Batch 4 and gives you a chance to have a taste of it before actually tasting it.

Finish
Long and rich, the oak notes intermingle with dark chocolate and earthy tobacco for an intense finish.