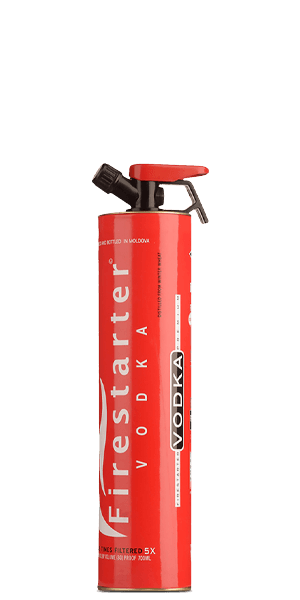 A real deal Eastern European Vodka with a silky palate and playful attitude.

Molvino Fine Wine & Spirits Company is an independent maker and bottler with offices in the UK, Dubai, and Turkey. They specialize in building and developing brands from all around the world, in particular from Eastern Europe. Their portfolio of brands includes Firestarter Vodka, Westminster Vodka, Tower Bridge Gins, Black Parrot Rum, and Molvino Prosecco.

Perhaps, the most interesting thing that Firestarter Vodka is best known for, is the innovative decanter — a long tube of brilliant red with a pinned nozzle on top that looks like a fire extinguisher. And while that seems gimmicky, on the inside is a real Moldovan Vodka made from red winter wheat that's been distilled five times and had a small amount of honey added in the final distillation. And can you imagine the confusion of the judges at the International Wine and Spirits Competition who awarded it Gold and Silver Medals year-after-year? It’s the premium Vodka in a red party dress.

The Flavor Spiral™ shows the most common flavors that you'll taste in Firestarter Vodka and gives you a chance to have a taste of it before actually tasting it.

Nose / Aroma / Smell
The aroma is light and fresh with gently toasted grains and florals.

Finish
The finish is crisp and clean.