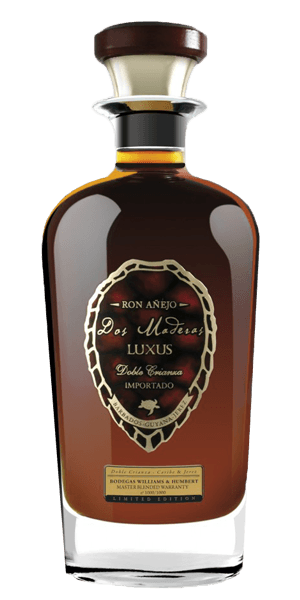 Dos Maderas is produced by the Spanish winery Bodegas Williams & Humbert. It was founded in 1877 by Sir Alexander Williams, a Sherry connoisseur, and Arthur Humbert, an international relations specialist. Located in the geographical triangle formed by the Spanish cities of Jerez de la Frontera, El Puerto de Santa María and Sanlúcar de Barrameda, the winery enjoys a unique microclimate for wine production – which is especially important if you own Europe's largest wine cellar. Innovation in the last decade brought them to the production of Rum.

Dos Maderas Luxus is the most prestigious expression in Dos Maderas’ range. It’s a blend of Rums from Barbados and Guyana, which are first aged for 10 years in the Caribbean, and later transported to Spain, where they undergo another 5 years of maturation in American oak casks that previously held the renowned and incredible Don Guido, a 20 year old Pedro Ximenez Sherry. While Dos Maderas’ PX 5+5 might be too Sherried for some, Luxus hits the perfect balance between Sherry and Rum.

The Flavor Spiral™ shows the most common flavors that you'll taste in Dos Maderas Luxus and gives you a chance to have a taste of it before actually tasting it.