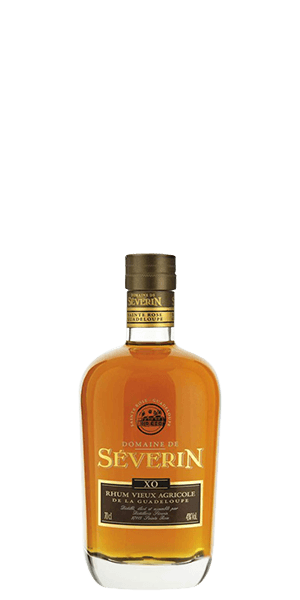 A well-aged agricole Rum with a surprisingly flavorful bite.

Domain de Séverin was founded by the Marsolle family in 1929. It is a family-owned “Distillerie Habitation” (distilling house) on the island of Guadeloupe in the Caribbean. It’s a true “estate” production — meaning that everything is done on-site, from growing the sugarcane to aging the Rum. And it’s definitely a small shop operation, producing only 250,000 liters of agricole Rum per year — a mere fraction of what the large production houses crank out.

Given the strong French influence in the Caribbean — and on Guadeloupe in particular — it’s not surprising that they have named their aged Rum using a Cognac term — “XO.” In this case that means that the youngest Rum in the Séverin XO Rum bottle has been aged a minimum of six years in ex-Bourbon casks. And since agricole Rums are more deeply influenced by the their surroundings and the woods they are aged in, this delectable Caribbean beauty reflects that Bourbon exposure in aroma and on the palate.

Smartass corner:
Agricole Rhum is also known as French-style Rum. It’s made from 100% fresh-pressed cane juice with no molasses.

The Flavor Spiral™ shows the most common flavors that you'll taste in Domaine de Severin XO Rum and gives you a chance to have a taste of it before actually tasting it.

Flavor / Taste / Palate
Powerful with wood, vanilla, and caramel-corn and a light floral and fruit note on the back palate.

Finish
Round and drying with plenty of spice.