Distillery
Founded in 2012
Washington Island, Wisconsin, is home to Death’s Door Spirits. The 22 square mile island was once known for its potato farming, but back in the 1970s, the contracts to grow potato crops dried up, and the industry died away.

Death’s Door Spirits began back in 2005, in part as an experiment, when a group of people began trying to start farming on the island once more – swapping potatoes for wheat. Brothers Tom and Ken Koyen had enough seed to plant five acres, and this grain is used in all of Death’s Door Spirits today.

The Flavor Spiral™ shows the most common flavours that you'll taste in Death's Door Gin. It's based on all Death's Door drinks in our large database and gives you a chance to taste Death's Door before actually tasting it.

Dog Dogson's
Smartass Corner
Death’s Door is named after the body of water between the island and the Door Peninsula, which was called Ports de Mort by the French who used to trade there, in a bid to ward off competitors.
Video from Death's Door
Video transcription
John Jefferey: My name is John Jefferey. I'm the head distiller for Death's Door Spirits. I came to Death's Door Spirits through Michigan State University. I was doing a graduate degree there in food science for the focus on fermentation and distillation, and as I finished writing my thesis and presenting it, I had also been doing consulting with Death's Door.

The story of Death's Door Spirits is really geographically based. So, it started on Washington Island as an economic development project to support agriculture there. Agriculture had died off in the '70s and the people who live on the island really wanted to bring it back and find a way to support it. The founder of the company, Brian Ellison, started what's known as Island Wheat in collaboration with Capital Brewing Company, and that became kind of a partnership that led to a really successful brand of Beer. And then, people on the island were kind of heartened by that and said, "Well, why don't we do Spirits?" And they kind of handed in this project and that's Death's Door brand has grown from.

John Kinder: Today, we're making a Death's Door Vodka drink. What I've done with this Vodka is I've actually infused it with fresh strawberries which are in season right now, and dried shitake mushrooms. I'm gonna measure out about an ounce and a half. Next, we have two parts Darjeeling tea, one part sugar. Next is a half an ounce of pomegranate juice and half an ounce of lemon juice. We're gonna shake that and strain. Again, this is an earthy Bourbon. This is a drink meant to be paired up with grilled swordfish, duck, anything that you would normally drink with a Pinot Noir Wine. Cheers.

John Jefferey: You know, we control this process from ground to the glass, so we have our hands in every part of the process. We carefully monitor and control. We reject batches if they're not good and so, you know, there is this really hands-on. Not only is there this connection to the land and to our story, and our background, but there is this really meticulous care that goes into the production of the Spirits themselves. 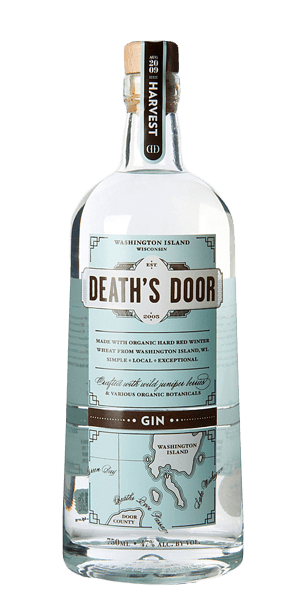