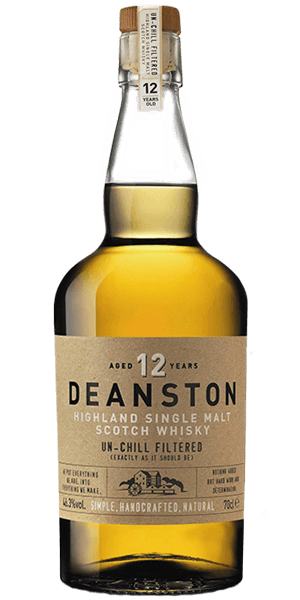 Deanston distillery started not as a distillery, but as a cotton mill, way back in 1785. Soon, the village of Deanston which is located in the Highland region of Scotland, began to form and a community was slowly built. In 1965 the cotton mill was closed, and looking for ideas, people at the company began making Whisky. Deanston uses no modern technology to produce their single malts and each bottle is hand-crafted. They’re uniquely the only distillery in Scotland self-sustaining for electricity, being equipped with a dam and a turbine, undoubtedly from the time of the cotton mill.

Deanston 12 Year Old Single Malt was recently relaunched in the form you see now. The new release is bottled at a higher proof, which amplified the Whisky’s subtle flavor. Matured for 12 years in ex-Bourbon barrels, this is a no-frills Scotch. It’s the daily-dose-of-Scotch from the Highlands. It's won many awards in the past 2 years, including IWSC Gold Outstanding and Double Gold at SFWSC.

The Flavor Spiral™ shows the most common flavors that you'll taste in Deanston 12 Year Old and gives you a chance to have a taste of it before actually tasting it.

Finish
Tingling, gentle, and quite lengthy.

Todd, Jan 20, 2020
This ranks up there as one of my favorites.. ordered one online but shipping is expensive. I wish it was available here.

Robert, Nov 14, 2019
Nice dram on a cold night. Definitely sweet with a warming sensation in the mouth. A hint of spice and maybe some citrus.

Kyle, May 24, 2016
Sweet oak on the nose with a medium citrusy finish. Decent flavor, but not my personal favorite