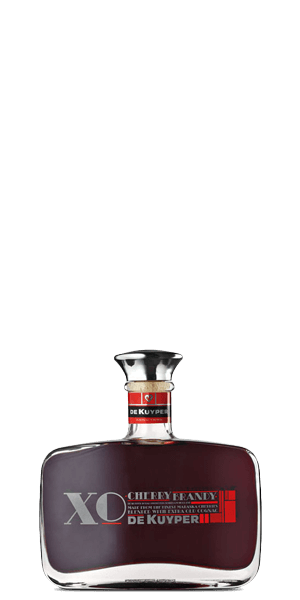 A decadent combination of ancient Cognac and cherries for righteous cocktails or as a luxurious Aperitif.

Petrus De Kuyper founded his company in the Netherlands in 1695 as a cooperage — a maker of finished barrels for Spirits manufacturers. By 1752 they had expanded into making their own Spirits with a private, family-owned distillery in the town of Schiedam. They built their business well, expanding across Europe, into Canada, and then in the United States after Prohibition by contracting distillation and licensing production of their wide array of famous cocktail mixers and ingredients. Simply stated, their huge array of products virtually define modern cocktail making.

De Kuyper XO Cherry Brandy is an amazing product. First, it is created in exceptionally small batches by modern standards — just 2500 bottles at a time. A bouquet of four cherry varietals is steep in twelve year-old, XO, Grand Champaign Cognac. This process results in a rich, even decadent Liqueur bottled at 28% ABV. Think of it as a finer, richer Grand Marnier but with a melange of cherry notes instead of bitter orange. And it’s a magical ingredient — making some of the finest craft cocktails we’ve ever had. Try it in an Old Fashioned or a Sazerac and thank us later.

The Flavor Spiral™ shows the most common flavors that you'll taste in De Kuyper XO Cherry Brandy and gives you a chance to have a taste of it before actually tasting it.

Nose / Aroma / Smell
A perfume of rich cherry, toffee, and elderflower fills the air around your glass.

Flavor / Taste / Palate
The flavor profile follows the nose with an explosion of rich cherry cordials on the tongue.

Finish
The finish in long and sweet.

Is Cognac A Brandy? And How Does Armagnac Compare To It?
>>>
Spanish Inquisition Silver Edition
>>>