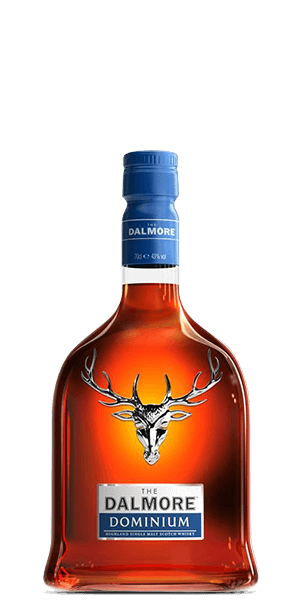 Scotland’s Dalmore distillery was established in 1839 by Alexander Matheson, an entrepreneur who had made most of his fortune in the opium trade with China. When he decided to sell his business 28 years later, the Dalmore was acquired by brothers Andrew and Charles Mackenzie of the clan Mackenzie – establishing the now-famous 12-pointed Royal Stag, a former crest of the clan, as the distillery’s emblem that has since become synonymous with the Dalmore.

This award-winning distillery produces its Whiskies in a combination of different stills that give their Whisky its more complex character, while the aging takes place in two types of casks: white oak Bourbon and handpicked aged Sherry.

The Dalmore Dominium is a part of the Dalmore's Fortuna Meritas collection, aged in 30-year-old Matusalem Sherry casks. Its name means “ownership”, referencing a 13th-century event when Colin of Kintail, the Mackenzie clan chief, saved King Alexander III of Scotland from a charging stag. The grateful king granted him a large amount of land, and the use of the royal stag emblem. This sherry-noted single malt with hints of toffee, molasses and tobacco perfectly embodies the Mackenzie clan motto, Luceo non uro, Latin for “I shine, not burn”. It’s bottled at 43% and has all the richness and strength that you would come to expect from something called Dominium, but its flavor never overpowers.

The Flavor Spiral™ shows the most common flavors that you'll taste in The Dalmore Dominium and gives you a chance to have a taste of it before actually tasting it.

Terry, Oct 7, 2017
Caramel and dates. Worth every penny and improves whilst in the glass.