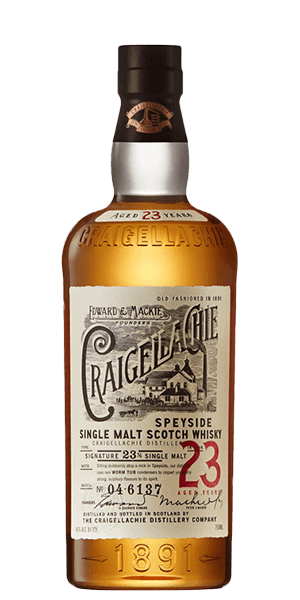 Craigellachie has been producing single malt Whisky on site since 1891. It is one of the original Speyside Whiskies. The name Craigellachie means “rocky hill” and, sure enough, it sits on a rocky hill directly across from The MacAllan facility in the township of Aberlour.

A majority of their production goes into the famous Dewar’s blend, and only a few single malt releases come available. Craigellachie is owned by Bacardi, perhaps not surprisingly through their Dewar’s and Sons subsidiary.

Like we just said, single malt releases from Craigellachie are few and far between, and always sought-after by aficionados. A 23 YO from them is the oldest and rarest they have released in decades. Craigellachie 23 YO is a flavor bonanza. So much complexity and depth is hard to find.

This particular release of the 23 Year Old won the prestigious “Best Whisky in Show” at the San Francisco World Spirits Competition in 2015. Makes you want to petition them to stop wasting their fine single malt in a blend, right?

The Flavor Spiral™ shows the most common flavors that you'll taste in Craigellachie 23 Year Old and gives you a chance to have a taste of it before actually tasting it.

Jack, Nov 19, 2019
Very unique dram that’s worth every penny. First; no smoke so rest easy. Slight citrus light taste with a very desirable taste of must. It’s like trying to describe the taste of chocolate. But it if you can get it.

Daniel, Jul 21, 2018
One of the best whiskies I’ve ever tasted, smooth and tasty, very very good. I’ll have to buy another when I get the chance.