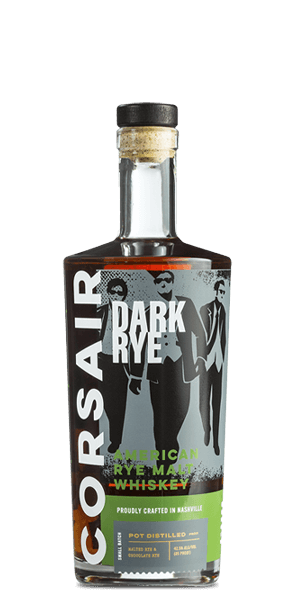 Buyer Protection
Money-back guarantee if things go wrong.
Corsair's barrels might be small, but they sure know how to use them. Exhibit A: Dark Rye American Whiskey.

It's that classic, childhood friends begin experimenting with brewing Wine, Beer and Sake in their garage, work on a prototype bio-diesel plant along the way and settle down making Whiskey, just because it's more fun, kind of story. You know the one. It's the story of Darek Bell and Andrew Webber who founded Corsair Distillery in 2008 nearby Bowling Green, Kentucky. Why Kentucky, you ask. Well, even though the Prohibition times were long gonzo at the time, Tennessee laws prohibited commercial distilling at the time. So, naturally, Bell and Webber just, you know, lobbied to change the law and in 2010, they opened the first craft distillery in Nashville since Prohibiton. Talk about making lemonade when life hands you lemons.

Novel, big, aggresive flavors of their adventurous and innovative Spirits, made from alternative and unconventional grains, inspired by unusual botanicals are famous for bringing you "Nashville in a bottle". But, they are also called one more thing: "Booze 4 Badasses". Sexy, non?

Aged in small barrels, this bottle carries the depth and maturity, usually achieved after years in large barrels. (Isn't it great when good things also come to those who don't want to wait?) Pot distilled at 85 proof, the grain bill of this exceptionally rich, smooth Whiskey features 61% malted rye, 4% chocolate rye and 35% malted barley. No corn to fill up that grain bill, thank you very much! The result testifies beautifully to Corsair's small barrel sorcery, producing the most luxurious Whiskey with notes of chocolate, coffee, spice and, yep, everything nice.

Smartass Corner:
Since Corsair doesn't use corn to fill up the grain bill, this bottle is technically both a Rye and a Malt Whiskey.

The Flavor Spiral™ shows the most common flavors that you'll taste in Corsair Dark Rye American Whiskey and gives you a chance to have a taste of it before actually tasting it.

Nose / Aroma / Smell
Rye, citrus and a hint of chocolate.