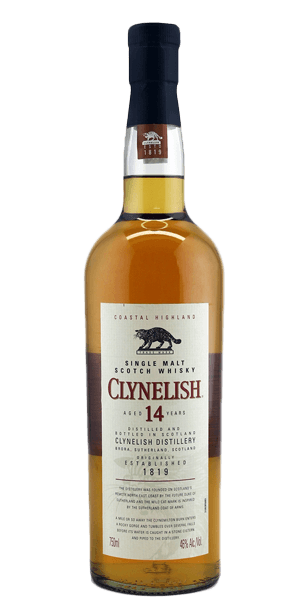 The Clynelish distillery was first established in 1819 by the Marquis of Stafford as an outlet for cheap grain from his tenant farms during the Highland clearances. In the mid-nineteenth century George Lawson improved and extended the distillery. In 1931 it was forced to shut down due to the recession, and full production didn’t commence until the end of World War II. The modern Cylnelish distillery was built in 1968, with a copper-domed mash tun, 8 Oregon pine wash back and 6 large stills. These two distilleries operated side-by-side until 1983, when the original distillery (from 1819) was closed. The Whisky from the original distillery was sold as Brora, a Scotch regarded highly by the Scotch fanatics.

Clynelish 14 Years Old is the distillerie's standard expression. It was matured for 14 years, which is an optimimum level for this one. It's the classic Clynelish; like the 16 year old for Lagavulin, the Quarter Cask for Laphroaig. Made in Highland, with a coastal influence, a great value for your money.

The Flavor Spiral™ shows the most common flavors that you'll taste in Clynelish 14 Years Old and gives you a chance to have a taste of it before actually tasting it.

Eric, Mar 3, 2020
My favorite go-to bottle. Never without a Clynelish 14. It's unique with some layers of flavor.

Mariano, May 4, 2018
Excellent. Nice fruit taste with balanced salt and smoke. Loved it.

Eduardo, Apr 4, 2018
Nice gold color. Neat plum aroma with pepper, honey and some smoke. At the palate is rich, creamy and full of vanilla and oak. Long aftertaste, really enjoyable.

guest, Dec 8, 2015
One of my favorite go to whiskies. Always satisfying bold flavors. Not for the faint of heart.
Load more reviews