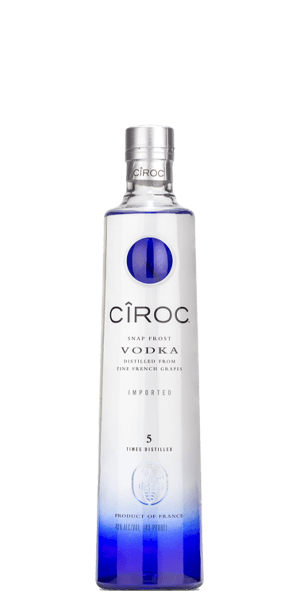 A brilliant, crisp Vodka made from Cognac grapes by a master and commander of the art.

Cîroc Snap Frost Vodka is the core of the line. Like many Cognacs, the Vodka is made from 95% Ugni Blanc and 5% Mauzac Blanc grapes. But while most grapes are harvested in early autumn, "snap frost" grapes are harvested later — after the first hard frost or freeze. They are picked quickly and pressed quickly. In effect, this lightly "freeze-dries" the grapes and thus removes excess water for a more dense and more flavorful juice. After fermentation the Spirit is distilled five times at the historic Distillerie de Chevanceaux.

The Flavor Spiral™ shows the most common flavors that you'll taste in Cîroc Snap Frost Vodka and gives you a chance to have a taste of it before actually tasting it.

Nose / Aroma / Smell
The aroma is light and ethereal with fruit tones and a delicate citrus zest with a hint of florals.

Flavor / Taste / Palate
The palate opens with a soft, luscious mouth-feel and, if taken neat, delivers a hint of clean fruit notes from tart apple and Meyer lemon zest to Grappa.

Finish
The finish is crisp with a light, almost Champaign-like after note.