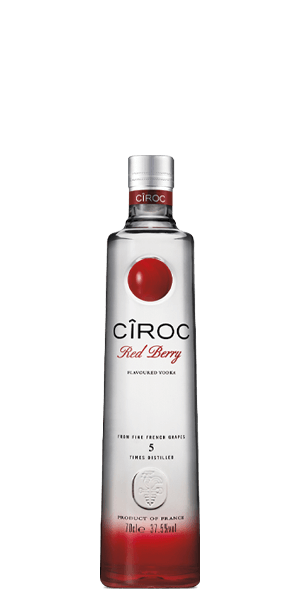 Cîroc Red Berry starts with the exceptional, award-winning Eau de Vie Vodka Spirit — 95% Ugni Blanc and 5% Mauzac Blanc grapes — distilled five times for a crisp, silky-smooth experience. The difference is that the Red Berry version is infused with essences of ripe strawberry and raspberry. It’s like the berries are whispering in your ear as you sip. And while it is very pleasant to sip on its own, it shines as the base for a Cosmopolitan.

The Flavor Spiral™ shows the most common flavors that you'll taste in Cîroc Red Berry Vodka and gives you a chance to have a taste of it before actually tasting it.

Nose / Aroma / Smell
The aroma radiates a hint of raspberry tartness over a note of grape must.

Flavor / Taste / Palate
It has the same luscious mouth-feel of original Cîroc with underlying notes of fresh berries and Meyer lemon zest.

Finish
The finish is crisp with a light, clean, and just a bit tart.

Jake, Sep 30, 2020
Reminds me of high school. Used to mix this with coolaid. I prefer the peach and green apple ciroc varities.