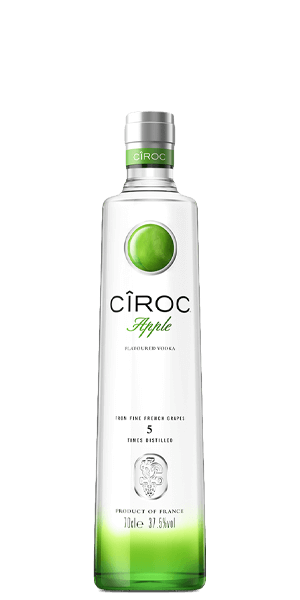 Cîroc Apple is THE perfect level-up for a slew of cocktails.

The first Apple Martini — or Appletini — was created in the bar at Lola’s West Hollywood restaurant in 1996. Then Cîroc Apple came along and it can now be made perfectly. The natural apple essences and hint of citrus notes infused into Cîroc’s signature Eau de Vie Spirit levels up the entire experience. This is a very nice infused Spirit to sip with nothing but ice. But it is an absolute joy to play with at the cocktail bar. We even mixed up an Apple Mojito replacing the Rum with Cîroc Apple — we could have drank those all night. And if you like a Moscow Mule, the natural affinity of apple and ginger makes that cocktail even more of a winner.

Smartass Corner:
Facebook founder and CEO Mark Zuckerberg never had an Appletini before. But in the movie about his company — "The Social Network" — the characters are seen drinking them. Zuckerberg has since declared the Appletini the official cocktail of Facebook.

The Flavor Spiral™ shows the most common flavors that you'll taste in Cîroc Apple Vodka and gives you a chance to have a taste of it before actually tasting it.

Nose / Aroma / Smell
In a glass with ice, the aromas are lively and a bit tart like autumn green apples.

Flavor / Taste / Palate
The apple notes extend into the palate with more complexity coming from a harmony of lime zest, Tahitian vanilla, and Grappa.

Finish
The finish is crisp, sweet, and a bit tart.